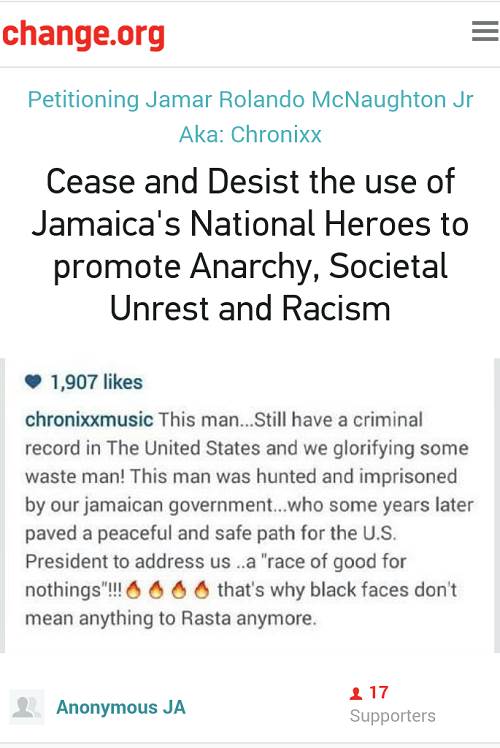 A cease and desist has been started for Reggae artiste Chronixx following a statement he made via instagram calling out President Obama for not dismissing mail fraud charges against Marcus Garvey. The artiste posted a picture of Marcus Garvey and posted

”This man..Still have a criminal record in the United States and we glorifying some waste man! This man was hunted and imprisoned by our Jamaican government..who some years later paved a peaceful and safe path for the U.S President to address us as ” a race of good for nothings”!!! thats why black faces don’t mean anything to Rasta anymore”.

Since the posting, Chronixx has faced backlash from his fans , producer Russian and Minister of Youth and Culture, Lisa Hanna tactfully warned him about putting more thought into his choice of words. The posting was later removed and replaced with milder words but accused the media of twisting his words.

”Evolution time now. After all the talk…judge and you shall be judged my elders say. I don’t mind the judgement of my Human family. I expect to be judged and told when I’m wrong…that’s actually a very healthy thing for me. Now for you….remember the words of the Likkle one from Spanish town said. The media will take it from here, twist it in the best interest of their “story”. And the struggle continues. Let jah be praised in all things. I read all the comments and now I see who is who! Love.
May the teachings of our beloved Marcus Garvey forever take root in our hearts. May the leaders of today take counsel in his divine teachings. May the leaders of tomorrow reap the fruits of his timeless works”.

0 thoughts on “PETITION STARTED FOR CHRONIXX”