Another alleged crony of Jamaica’s most wanted man Duppy Film, was captured during a joint police/ military operation, on Tuesday. 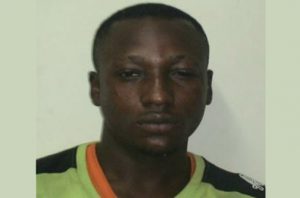 His capture on Tuesday was part of a police /military operation to apprehend Perry. The operation continued yesterday in Cross Keys Manchester.

Police say Eldemire was wanted for murder, wounding with intent, robbery with aggravation and illegal possession of firearm.

The police are reminding the public of the 1 point 5 million dollar reward to anyone, who can give reliable information leading to the arrest and charge of Perry.

Perry, of Phillipsfield in Yallahs, ST. Thomas, was implicated in the brutal slaying of Corporal Kenneth Davis and Constable Craig Palmer.

Perry is also wanted for multiple counts of murder, shooting, assault at common law, wounding with intent, robbery with aggravation and illegal possession of firearm.

One thought on “POLICE CAUGHT MEMBER OF DUPPY FILM’S GANG”