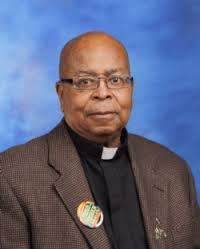 Father Robert Harrison (pictured left), who has taught for 26 years and coached basketball for 20 years at the renowned Cardinal Hayes High School (pictured) located in the Bronx, N.Y., has reportedly admitted to sexually abusing minors throughout the ’70s and ’80s, sending shock waves throughout the community, according to NBC 4.
Father Joseph P. Tierney, the president of the academic institution, sent home a letter to parents on Monday revealing how the highly regarded and popular priest had openly admitted to his deviant behavior during an investigation of his personal finances.
“As of now, we have not received any allegations from victims/survivors, and based upon information that we have received from Father Harrison thus far, it does not appear that any of the abuse involved students from Cardinal Hayes,” said Tierney.
It has not been revealed why Harrison was being investigated financially.
According to Tierney, Harrison has never been accused of any type of misconduct during his years as a teacher and he urged parents to contact the prosecutor if they wanted to discuss any incidents or concerns involving the priest.
“The safety of your children is our highest priority, and we strive to maintain the safest environment possible for our students,” he said. “We will continue to cooperate with the civil authorities as they investigate this matter.” The letter then goes on to apologize for the upsetting admission, “We are deeply saddened and sorry for what has occurred.”
Joseph Zwilling, the spokesman for the Archdiocese of New York, told NBC 4 that Tierney also gathered the students, divided them into two groups, and explained Harrison’s activities to them. He also advised any youth who had experienced sexual assault at the hands of Harrison to come forward.
The high school, which goes from grades 9 through 12, is the alma mater of such notables as talk show host Regis Philbin, NFL Jets offensive guard Willie Colon, and NBA Dallas Mavericks’s and Miami Heat’s Jamal Mashburn.
Upon learning about the sexual abuse, the high school and Catholic Archdiocese reportedly fired Harrison then referred the matter to the district attorney offices in two boroughs and in Milwaukee as well where the priest also taught. Harrison is being allowed by the local district attorneys to leave New York City to begin “risk assessment” under the supervision of his religious community, the Capuchin Province of St. Joseph, based in Detroit. He has also been banned from having any contact whatsoever with any minors.
Harrison’s case is still being investigated.