DOCUMENTARY ON THE LIFE ON NANNY IN THE WORKS 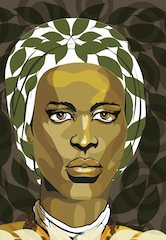 ROY T Anderson, American-based Jamaican film director/producer is currently in Ghana, completing work on his documentary on national heroine Nanny of the Maroons.
Anderson and his team are expected to wrap the shoot within two weeks before heading into pre-production of the project, which is expected to hit the small screen towards the latter part of this year.
“We have filmed in all the Maroon communities in Jamaica (Accompong, Scotts Hall, Charles Town, and Moore Town); and also in the Blue and John Crow Mountains. Of particular note, we conducted a 35-person filmed expedition to Old Nanny Town in the Blue Mountains. We have also filmed in various cities in the United States and Canada,” Anderson told the Jamaica Observer.
“I first want to show that Nanny was a living, breathing human being, first and foremost… a lot of the books which have been written in the past have shrouded her in mystery… for such a significant figure in the resistance movement. I want to give her her due, and I feel this documentary is the best way to lift the legend from the text,” he continued.
This is Anderson’s second film project on the Maroons. His first, Akwantu, traced his own connections to the Maroons in the Accompong region of St Elizabeth.
“Akwantu was a uniquely personal story, but this becomes the sub-plot to highlight the story of the Maroons which are a significant part of Jamaica’s history, which I wanted to share with the rest of the world,” he said.
Anderson further stated that the reception he received from his debut prompted his current journey.
At the moment the project is self-funded, but Anderson anticipates future support from various funding bodies in Jamaica and the United States.
“We have also received a significant amount of in-kind support, especially from the Jamaica Defence Force, which greatly assisted our expedition to Old Nanny Town back in the summer.”

99 Users Online
Back to top