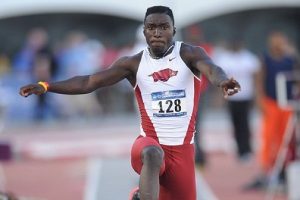 UPDATE: No charges against Jamaican athlete Clive Pullen
PAUL A REID Observer Writer
Friday, June 13, 2014 | 9:06 PM 4 Comments
Print this page Email A Friend!
Pullen competing in the triple jump during the NCAA Outdoor Track and Field West Preliminary Meet.
KINGSTON, Jamaica — Former Kingston College and Jamaican junior triple jump representative Clive Pullen is unlikely to face charges or punishment after a mix up at an American retail outlet in Arkansas on Thursday saw him being taken to a police station on accusation of shop lifting.
Reports reaching OBSERVER ONLINE are that Pullen, after forgetting his wallet in a vehicle Thursday morning and advising a cashier that he would leave the items he had picked and return to pay for them, an alarm was triggered and the store security alerted.
The police were called and after waiting for three hours for their arrival, Pullen accompanied by his two companions including another former Jamaican triple jumper Tarik Batchelor, went to the police station.
OBSERVER ONLINE was told that at the police station the freshman athlete at the University of Arkansas was taken through formalities but was not charged.
Garfield Hall, a fellow Kingston College old boy who spoke to the athlete and is helping him to clear his name said Friday that Pullen was fine and expected things to be “worked out soonest”.
OBSERVER ONLINE also made contact with Pullen, who said only that he was OK and that the university would be handling things on his behalf.
Media reports say that Pullen was arrested at a Wal-Mart Supercentre for stealing fish and cloths, booked into the Washington County jail Thursday and was released on a US$565 bond.
However Hall denied the reports. “There was no bail and no jail involved,” he said.

0 thoughts on “PULLEN NOT CHARGED”