RAPPER WAS ON TRIAL FOR MURDER FOR HIRE ………WHO DOES HE REMIND YOU OF? 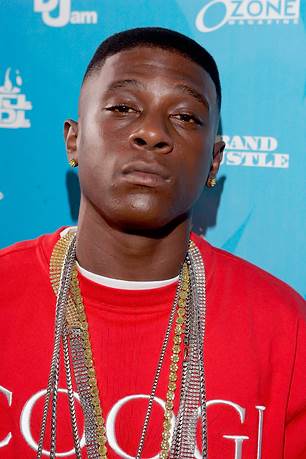 According to opening statements delivered on Saturday afternoon by the prosecutor, Assistant District Attorney Dana Cummings, the killings were a $2,800 murder-for-hire ordered by Boosie and executed by his henchman, 17-year-old Michael “Marlo Mike” Louding. The defense alleges that the slaying was the work of a teen hitman with the mind of a maniac, a rogue gunman haunted by a demonic choir of voices hollering, “Kill.” In an impassioned opening salvo, Jason Williams, one of Boosie’s attorneys, steadfastly maintained his client’s innocence, alleging that Louding acted only in concert with Michael “Ghost” Judson and Adrian Pittman. In the weeks before the slaying, Williams claimed, Boyd robbed Judson for $720, while Pittman allegedly harbored a long-time grudge against Boyd.

Williams also argued that Boosie is being unfairly persecuted for his gangsta rap lyrics, which are laced with accusations of racism aimed at law enforcement officials, including Parish District Attorney Hillar Moore III.

It was half past midnight on October 21st, 2009, when a 9 mm handgun fired six bullets through the front window of a house on Vermilion Drive. By the time police arrived to the residence in East Baton Rouge, 35-year-old Terry Boyd was dead, his body staining a brown leather couch the color of crimson. A neighbor spotted two men sprinting towards the train tracks near the residence of Ben Hawkins, where Boyd had been staying ever since he completed a five-year stint at the Winfield correctional facility, just one month prior. Boyd left behind a disposable camera, $402 in cash and a bloodstream spiked with morphine, marijuana, and codeine.

With no DNA evidence or eyewitness to the shooting, the prosecution is hinging its case around a taped jailhouse confession from Louding and telephone records that trace him to Boosie’s recording studio during the hours before and after the murder. Also presented as evidence: a tattoo that Louding allegedly received two weeks after the murder – a depiction of an AK-47 accompanied by the phrase, “Yo Boosie. Who’s Next?” – and the lyrics to Boosie’s songs “187” and “Bodybag,” which Cummings says were recorded on the night of the murder.

According to Cummings, the motive for the murder stemmed from a letter that Boosie received claiming that Boyd was going to “jack and slap him.” The defense maintains that no such letter exists and that Boosie and Boyd had an amicable relationship, noting that Boosie had a child by Boyd’s sister.

Louding’s nickname derives from The Wire character Marlo Stanfield, known for his homicidal tendencies and his knack for eluding police. The state has charged Louding with five other killings over a 14-month spree, including that of Michael “Ghost” Judson, who allegedly paid Louding to murder Chris “Nussie” Jackson (a rapper with scathing diss songs about Boosie), and Darryl “Bleek” Milton, a longtime friend of Boosie’s. The defense team is pointing to the latter homicide as proof that Boosie had no control over Louding, who had “run amok.” Boosie is only charged in connection with Boyd’s murder.

Over several hours of pitched testimony on Monday, Louding denied his and Boosie’s culpability in the Boyd murder. Bound in chains and clad in a candy-striped orange and white jumpsuit, Louding blamed his jailhouse confession on “crooked cops,” who allegedly threatened him with lethal injection and the incarceration of his mother and stepfather. During one dramatic turn, Cummings and the court forced the shackled Louding to display his “Yo, Boosie. Who’s Next” tattoo before the jury, despite the fact that Cummings already had blown-up photos of the tattoo by her side. Louding also alleged that his confession was coerced by interrogators who had claimed that Boosie had put a $25,000 bounty on his head.

After Louding’s testimony, police Sgt. Chris Johnson took the witness stand and denied making any threats towards Louding. Defense attorneys pointed out that the confession represented only a small fraction of the hours that police had spent interrogating Louding on May 14th and May 17th, 2010. According to police, only Louding’s confession was taped. During several hours on the stand, Johnson repeatedly denied telling Louding that Boosie had put a hit out on him. But during the videotaped confession, Louding is distinctly seen exclaiming, “That dude want to kill me? He’s getting out now?” on camera.

“We haven’t seen a smoking gun yet, and the defense is doing pretty well in rebutting the charges against Boosie,” Kenneth M. Willis, a Baton Rouge and New Orleans-based criminal defense attorney who’s been watching the proceedings closely, tells Rolling Stone. “It’s going to come down to whether the jury believes Louding’s recanting his earlier taped statement and whether the prosecution can successfully tie [Boosie’s] lyrics into his intent to commit a murder-for-hire. Right now, rap is on trial, Boosie’s rap music is on trial, and to me, it looks like a long shot that he’ll be convicted.”
Outside of Louisana, Lil Boosie has never achieved the same level of fame as his once-incarcerated peers, Lil Wayne, Mystikal, T.I. and Gucci Mane. Only one of his tracks has ever cracked the Top 40 – 2007’s “Wipe Me Down Remix,” which is actually credited to the rapper Foxx, a labelmate of Boosie’s on Trill Entertainment. But within the Bayou, and particularly in Baton Rouge, Boosie is an icon, emulated by both Catholic School preps and kids in the hood who rock a haircut known as the “Boosie Fade.” The reason: his music strikes a street-hardened three-dimensionality rarely seen since Tupac Shakur. For every song about the murderous slums of Baton Rouge, there are moving paeans to Boosie’s mother (“Mama Know Love”), rollicking dance songs (“Loose as a Goose”), and struggle anthems with universal themes (“Going Through Some Thangs.”)

“Boosie is to Baton Rouge what Tupac was to California,” says Ya Boy Earl, a popular DJ on the local radio station MAX 94.1 FM, and a highly influential figure in Baton Rouge rap. “Whether he’s [rapping] about something negative or positive, everyone can relate to it. Everyone in town is talking about the trial. The news is probably getting ratings they didn’t even get during Hurricane Katrina.”

Prior to this trial, Boosie was locked up on charges of marijuana possession and possession of a firearm. And while at the Louisiana State Penitentiary in Angola, he was sentenced to an additional eight years for attempting to smuggle codeine and illegal contraband into prison. During the initial nine-hour-a-day sessions held last week, one excused juror after another proclaimed their absolute belief in Boosie’s innocence or guilt. In an attempt to filter out bias for the Boyd murder trial, the jury selection process lasted five days.

The prosecution depicts Boosie as a cold-blooded killer, but among many Baton Rouge residents, he’s also known for his philanthropy.”When you think of Baton Rouge, the first name that comes to mind is Boosie. For the individuals going to work every day, the people still out there hustling in the streets, trying to make a living for their family, Boosie is the person who they most identify with,” said Ashari J. Robinson, a budget analyst for the state of Lousiana. “But he’s more than a rapper – he gives out turkeys on Thanksgiving, bikes on Easter and toys at Christmas. He’ll write letters to children urging them to stay in school and not make the same mistakes he’s made.”

Not only does a substantial portion of the under-30 population know every word to Boosie’s songs, but they know the street he grew up on, the shops he frequented and the make of the caravan of cars with which he used to cruise through town. In a city with no other national figures, save for maybe Bobby Jindal, Boosie is an ambassador of Baton Rouge rap – a beacon of pride for his admirers, and a pariah for his enemies.

Consequently, the streets of Baton Rouge radiate with talk of the trial, from the front pages of the city’s newspaper, the Advocate, to clerks at the local Ramada Inn whose Instagram and Twitter feeds swell with updates. Inside the courtroom, the atmosphere is hyper-intense. Judge Michael Erwin has banned cell phones and all electronics under penalty of mandatory six-month incarceration. On Monday afternoon, a 21-year-old man named Dedrick Green was booked on felony counts of public intimidation and terrorizing for writing on Twitter, “I got a sniper rifle for Hillar Moore when he walk out the courthouse.” Police deputies found him sitting inside the courtroom.

Outside of the 12-story glass bivouac on North Boulevard, speculation and hearsay abound. On the surrounding downtown streets and everywhere else, you will hear talk about dirty cops, Bible Belt bigotry, and blood vendettas. When locals are pressed for further explanation, the usual response is: “Welcome to Baton Rouge.”

0 thoughts on “RAPPER WAS ON TRIAL FOR MURDER FOR HIRE ………WHO DOES HE REMIND YOU OF?”