They Took My Son! – ‘I Beat Him And The State Made Me A Convict And Him ‘A Dangerous Criminal’

Almost seven years after she was arrested and charged with child abuse and her then 11-year-old son taken from her and placed in state care, Joan Brown* is now being targeted by the police who are searching for the boy, who is now 18 years old and has been labelled a dangerous criminal.

Brown, a single mother of six, spent four days in police lock-up in 2012, had her parental rights revoked, and was fined $150,000 or spend six months in prison for beating her son after he stole snacks from a neighbour’s shop. 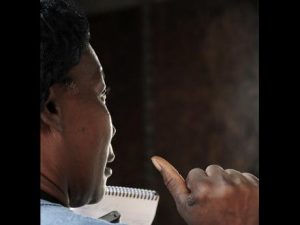 Now Brown says she is living in fear and is being harassed by the police, who are searching for the boy they claim is linked to some serious crimes.

The frustrated mother said she tried to discipline her son by beating him with a wire after reaching home one Sunday evening to her neighbour’s complaint that he and two of his friends stole from his shop.

Another neighbour who witnessed the beating called the police, and within a few hours they were at her house and arrested her for child abuse. She was first taken to the Hunts Bay Police Station and then transported to the Duhaney Park Police Station, where she spent four days before being offered bail in the sum of $50,000.

According to Brown, after three court appearances, she was convicted and had to pay the $150,000, which she borrowed from her workplace, to avoid a six-month prison term.

She was told that her son would become the responsibility of the State and he was placed in a children’s home. Brown told The Sunday Gleaner that she had beaten her son because she was trying to curb his behaviour.

“Me grow with that saying, whatever don’t concern you, leave it alone; because small thief lead to bigger thief, lead to murderer,” said Brown.

“It wasn’t given to you, so you deserve beating for thiefing it. When me small, if my granny tell me seh throw the sugar in the jar, and don’t throw none in your hand, I would have to obey,” she said.

Brown said although her son was displaying behavioural issues from as young as 10 years old, she did not make a habit of beating him. Instead, she sent him and his siblings to Sunday school, got them involved in school activities, and eventually solicited the assistance of a female police officer to counsel him.

“Him did a get bad, that’s why I had to give him the hard lick them. I would come to work and I am leaving and I say ‘stay in the yard’. When I reach home, him don’t come in until about nine, 10 o’clock. Him will pull the window and go through the window and close it back,” said Brown, an office attendant.

“Normally, me no really beat, but when me giving a beating, you get a proper beating, but I’m not licking you in your eye and them place there, is them place here I am licking you on,” she said while slapping her own buttocks and thighs to indicate how she disciplined her children.

The mother said she visited her son on occasions at the children’s home, but after just three weeks, she was informed that he ran away with a group of boys. She said a probation officer made contact with her and asked her about his possible whereabouts, but after a few months of follow-ups, she stopped hearing from him. She then sought the assistance of the police.

“I go back over the station and talk to the police, and the police say they don’t business with them deh story deh,” she said.

But now the tables have turned, because the police in recent times have been soliciting her help to locate her now 17-year-old son, who they suspect has been engaged in criminal activities. This, she said, has further compounded the nightmares she has been experiencing since they arrested her several years ago.

“All now, those things just rest on me, because I was trying to get the child the right way, then the Government come into play, send the child go somewhere, now they don’t know where the child is either, and the child has gotten so bad now,” she said.

She said she has been warned to leave her community due to gang violence that has left three people dead and seven houses burnt to the ground. There are speculations that her son or individuals he associates with might have been involved.

“I have to move and look a shelter for myself. I don’t live anywhere now, it’s people place I kotch because of the Government and the system,” said Brown.

“One morning I woke up and when I look is pure police I see cordon off the yard that I stop at, and they say they are looking for wanted man,” she said, while explaining that they were referring to her son.

“Him don’t reach 18 yet, so it’s the State that is responsible for him same way. The State can’t tell where he is, so why are they asking me for him? Is me supposed to be asking them where he is because he was under their control,” she said.

Brown said her conviction for child abuse has made life difficult for her since convicts are often stigmatised and scrutinised by society.

“It mash me up totally, because sometimes you go some place and you get a form to fill out and the first thing on the form is, have you ever been arrested? It’s just embarrassing,” she said.

Brown argued that some parents tend to beat their children “out of ignorancy”, and this causes serious damages, but she said this was not the situation with her son who was taken to the Bustamante Hospital for Children afterwards and was given a clean bill of health.

She fears that the conviction of parents for administering corporal punishment could contribute to even more crime in the country. Currently, corporal punishment is banned in schools and the United Nations Committee on the Rights of the Child wants a full ban. But the single mother doesn’t want this option to be taken away.

“The Government need to go back to the drawing board with some of these rules that they are putting out for parents not to beat children,” she said, even as she expressed no remorse for beating her son.