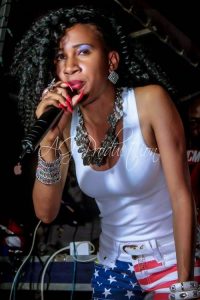 Gaza Slim and the armed Lizard – #KartelMurderTrial
Posted on February 5, 2014 by emilycrooks

Examination in chief of – DSP Vernal Thompson of St. Andrew North Police. These are my verbatim notes of his examination in the murder trial of Vybz Kartel and others. Jeremy Taylor is the lead prosecutor who marshaled the evidence

Q- after you arrested and charge Palmer what next
A- oct 29, 2011, rec’d certain information related to an alleged case of robbery against Vanessa Saddler otherwise called Gaza Slim

A- this alleged named a suspect – Clive Lloyd Williams otherwise called Lizard who was armed with a firearm. I gave instructions based on this report for investigation to be conducted into Gaza Slim’s report and specifically to record further statement from relatives and friends of suspected deceased of Clive Lloyd Williams now being treated as a suspected robber.

These statements were recorded and they gave me certain information. Since this report I received a number of information and based on this information, I caused searches in Portmore, searching for body of Lizard. I searched along the Dyke Rd in bushes as also Stony Hill area of St. Andrew North Division that is in the upper part of Stony Hill along Old Stony Hill Road.

I made applications to a number of funeral homes, hospitals and morgues across the island and received verification letters from all institutions.

I searched Bent funeral home in St. Elizabeth, Mispa in St. Mary, Witted and Sons, Doyley’s in Westmoreland and Roberts in St Catherine

Oct 25,2011 – Attorney-at-law, Tamika Harris visited Constant Spring to facilitate Q&A with Kahira Jones. Attorney spoke privately with Mr. Jones and then I returned to my office. No limit was put on the time. The attorneys always dictate time to the police.

I cautioned the accused, Kahira jones. DSP now asked by prosecutor Taylor to identify Jones. He points out a smiling Jones who rises in the dock.

After I cautioned him, I told him I’m investigating murder and disposal of body of Clive Lloyd Williams and wished to ask some questions. I showed him clean sheet of foolscap paper and asked the accused a total of 55 questions to which he made no comment on instructions of his attorney to all of them except no 25 where he was asked if he was cold and he said ‘mi alright man’.

His attorney present immediately sought clarification of the word’ cold’. Detective Inspector Reynolds explained that cold meant the temperature within office as the AC was on.

After Q&A the accused was told he can add, alter or change anything he wishes and he made no corrections. Questions were read to to the accused in presence of his attorney and he signed at appropriate places.

Coming in next blog- what Shawn Storm told DSP Thompson after his Q&A.
Gaza Slim and the armed Lizard – #KartelMurderTrial