Appearances have rarely been more deceiving than in the case of David Rodigan. The veteran DJ is known as the UK’s leading authority on reggae music, and has been spicing up British radio with Caribbean flavours for more than 35 years. And yet, a funky hat and Lee Scratch Perry T-shirt aside, this equable, bespectacled Englishman looks more like a provincial geography teacher than a man capable of rocking crowds from London to Jamaica with a fistful of dubplates. 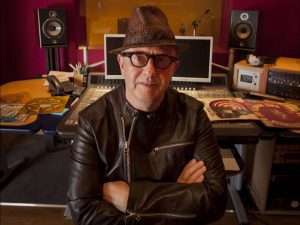 But then Rodigan has a way of flying in the face of expectation: now 62, in an industry where youth is king, he is enjoying an unlikely career peak. In the past two years, he has made his debut at Glastonbury; won the World Clash Reset in New York – a DJ sound clash akin to a reggae World Cup; received an MBE for services to broadcasting; and launched a hugely successful touring club night, Ram Jam. “I can’t believe it’s all happening,” he says incredulously.

Meanwhile, his currency as a radio DJ is as high as ever: in 2012, he resigned from Kiss FM after 22 years, in protest at being consigned to a midnight slot in the schedules, only to find himself snapped up for a primetime, Sunday evening show on the BBC’s youth-oriented, urban music station 1Xtra.

What’s his secret? “I suppose it’s my passion for music and sharing it with like-minded souls,” he offers. But it’s not just what he does, it’s the way that he does it. Just search for “David Rodigan sound clash” on YouTube. There are dozens of clips of him onstage at these reggae sound-system contests. Sometimes the only white man to be seen, he bounces around, puffing his chest, grinding his hips like Mr Boombastic and singing along, then ordering his DJ to rewind records. (He used to play the records himself, but now he confines himself to the role of “hype” man to concentrate on showmanship). On paper this might make him sound like a drunk uncle at a wedding – but such is Rodigan’s affinity with Caribbean culture, it’s actually a joy to watch.

Rodigan first fell in love with Caribbean music as a 13-year-old boy living in Oxford, when he watched Jamaican schoolgirl Millie Small sing “My Boy Lollipop” on Top of the Pops. Soon after, he got a Saturday job and put his wages into building up a collection of vinyl imports. Despite DJ-ing from an early age at school dances, however, acting was his first career choice and, after a stint at drama school, he spent his early twenties trying to make it on stage and screen: his most notable role, he recalls, was in Doctor Who playing a sort of futuristic caveman for which he had a “special set of teeth made in Harley Street”.

He made the move to broadcasting in 1978 when an actor friend persuaded him to audition for Radio London, who were looking for a new presenter for their Sunday afternoon show, Reggae Time. That he is neither black nor West Indian has long ceased to be an issue in reggae circles – but it was an issue at that audition, he says. “The [white] producer of the show said to me, ‘Mr Rodigan, I’m afraid you’re the wrong colour.’ I said, ‘That’s fair enough’.” But a month later he got the job anyway – after the producer played several of the audition tapes to West Indian record producers, “and they said, ‘You should use this Rodigan bloke, whoever he is’.”

Why did they pick him? “I think they could hear I had the passion for this music. But I never attempted to be Jamaican. Some people go the whole nine yards with their dress and speech and everything, but I’m just a passionate collector.” Has he ever had to struggle for acceptance? “Once I was on the radio it gave me an advantage. My show was the biggest in the West Indian community.” Many listeners assumed he was black. At his first DJ gig in west London he took to the stage to “deafening silence” – when he began to speak, he noticed people closing their eyes to concentrate on the sound of his voice, and eventually a wave of recognition swept around the room.

Rodigan moved to Capital Radio in 1980, where he was able to bring reggae to a large mainstream audience; and, in doing so, won the respect of the genre’s biggest names. Bob Marley agreed to be a guest on his show, after they met outside a pub on the King’s Road; Marley had been “on the end of a big spliff” that generated so much smoke Rodigan thought a shop had caught fire. From those early days, he also recalls the eccentric Lee “Scratch” Perry popping around to his flat in Barnes, and doodling all over his own album cover in biro, and fellow dub-reggae pioneer King Tubby cutting him his first ever dubplate – an exclusive reworking of a famous reggae song that serves as ammunition in a DJ sound clash. “He was a great friend,” says Rodigan, adding, to conversation-stopping effect, “until he was murdered”. (He was shot outside his Kingston home in 1989, and the case has never been solved.)

What makes Rodigan still relevant in 2014 is his undiminished appetite for unearthing new sounds and talent – both on the radio and on his new mix-compilation for the Ministry of Sound’s Masterpiece series; a three CD boxset of the music that has inspired him over the decades, the third CD is sprinkled with cutting-edge reggae. He raves about the new reggae revival in Jamaica, led by young singers like Chronixx and Jah 9 and bands like Raging Fyah. He also has high hopes for emerging British talent such as Cate Ferris and Liam Bailey.

Rodigan seems immune to cynicism – and he believes the future is bright. “My wife is a black Jamaican; when we first started dating 35 years ago mixed couples were not a common sight,” he says. “That is no longer the case and that speaks volumes. You can hear the change in music too: everything used to be very separated – now it’s not unusual to hear a drum and bass record followed by a dubstep record, a rocksteady record and then a Bob Marley record. We’re seeing more fusion than ever before.”

Even when addressing the subject of profound social change, Rodigan ends up talking about music. He can’t stop himself. Nor would we want him to.

0 thoughts on “DAVID RODIGAN SAYS THE MUSIC HAS CHANGED!”