RESPECT LIKKLE KEV FOR TALKING ABOUT YOUR ABUSE 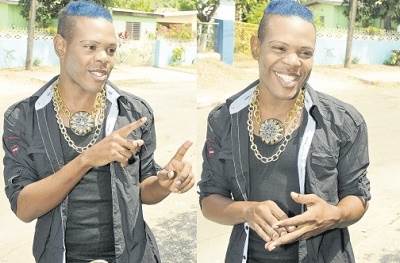 WHEN the Sunday Observer visited actor Kevin ‘Little Kev’ Mullings at his August Town home last week, he was the perfect host.

With the midday heat unbearable, he sought the most comfortable spot to accomodate his guests.

Mullings is getting a lot of attention for his portrayal of Wasp, the talkative and mischievous character in the roots play Bashy Big Yard. It has drawn comparisons to fellow actor, Keith ‘Shebada’ Ramsay, current king of slapstick theatre.

These are good times for the 23-year-old Mullings, who has been involved in theatre for over 10 years. However, his life has not always been rosy. He endured bad times while living in England where he moved to at age seven to be with his father. He attended and studied drama at Eastbury Comprehensive and Warwick All-Boys’ School in London.

However, a domestic dispute saw Mullings returning to Jamaica after five years and back to August Town.

“A male family member tried to sexually molest me. I told my family and they didn’t believe me, so I ran away,” he said

That incident also marked the end of Mullings’ formal education. With barely any means of survival, he said he lived by himself in a house owned by his grandmother.

“My grandmother lived elsewhere and on a good day she would bring food items mainly mackerel, flour or rice. I was very grateful as I had no one else helping me,” he said.

Despite his struggles, he was determined to become an actor and jumped at the first opportunity he got. Producers of the 2004 roots play, Believe Half of What You See, were seeking a female character called Ginger and Mullings believed he was the perfect candidate.

“They were a bit hesitant as they were seeking a female to play the role of Ginger, who was an exotic dancer. However, I auditioned and gave them a mixture of Delcita and Shebada character. I changed up my voice and then showcased another side to me and the producers were impressed,” he recalled.

In 2011, the actor said he got his breakthrough in the play Single Mother, which saw him returning to England where the play had a brief run.

Before Bashy Big Yard, he appeared in other productions including Passa Passa Tun Up.

While he loves theatre, Mullings is eyeing a career in film. He refuses to be typecast.

“I am hard to figure out and I refuse to play one character. Today, I may be mushy and playing the role of a female and tomorrow I will play the part of a thug or a scholar,” he said.

0 thoughts on “RESPECT LIKKLE KEV FOR TALKING ABOUT YOUR ABUSE”