MawlaCalaloo really Done did it this time.This won’t be our typical 9day wonder becuz the big bad wolf Merica is involved and dem making demands!In the interest of fairness there are arguments in support of her,so here are the pros and cons.

Cons
1)The attorney general is the country’s leading advice lawyer.How chupid is it to appoint someone who doesn’t know the law or bother to research it that embassies are declared thier soveriegn lands? 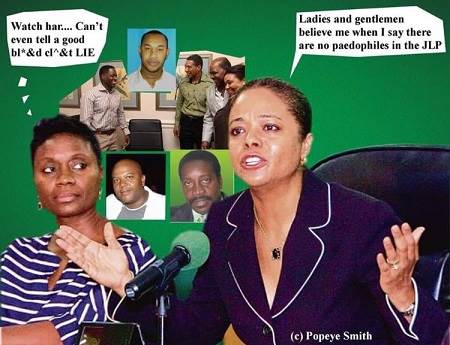 2)She is yet to clarify what laws were broken/disrespected.Dont expect her to cuz the fact is none were broken in the flying of the flag.

3)Many pressing issues are impacting Jamaica,even within the Orlando tragedy 2 Jamaicans were killed so why haven’t we heard mawhla on our issues 100days+ now??

4)Why go bring unnecessary attention to our country for the gay lobby to pressure our tourism that we homophobic.She MUSTVE known it was gonna pissed them off,either she doesn’t care or can she really be THAT stupid??

Pros
1)‎Something can be legal but still immoral.It may be legal to fly that flag but most Jamaicans would agree it rubs dem the wrong way morally.

2)Why didn’t Merica fly the rainbow flag in any other country?Not russia,the middle east,Africa,they didn’t even flew it in the USA?!!Duppy know who fi frighten huh.

3)Many Christians are commending her for speaking up for Christian values and principles.

4)All embassies function along the lines of respecting their host countries sensibilities,culture,nuances.The Ambassador to a Muslim country wouldn’t dare show the sole of his shoes to a Muslim.It is not illegal to do so esp at their embassy but they won’t do it out of respect for them.Oh but true we need the Lil IMF pittance we haffi hug up the disrespect hu?

She is being pressured to retract and apologize by no less than the PM Anju.Anju remember you still have her pre-signed resignation letter from the senate,Use it and put today date and solve the problem dwrcl!!!