RIHANNA MOCKED TEEN WHO TRIED TO DRESS LIKE HER 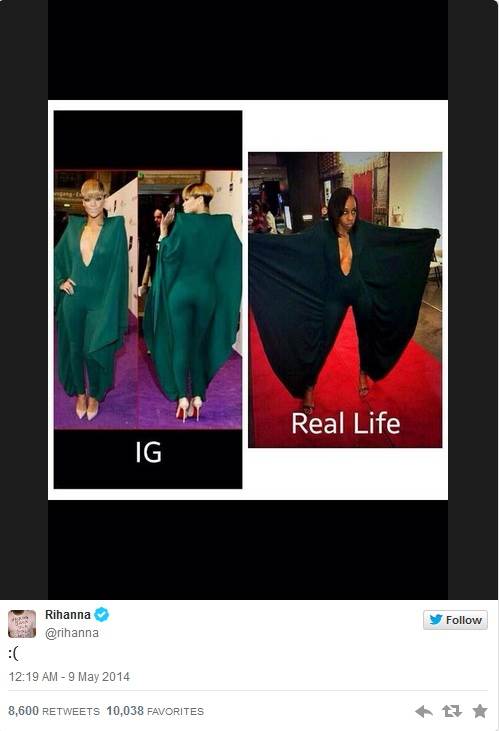 Updated: Wednesday, May 14 2014, 01:34 PM EDT Rihanna Mocks 16-Year-Old Fan’s “PromBat” Outfit A Baltimore teen who dressed as her once-idol, Rihanna, for a Hollywood themed prom has been the target of cyberbullying, including two mocking tweets from the music star herself. Sixteen-year-old Alexis Carter knew she would turn heads when she decided on a caped crusader-style prom outfit, one which was modeled after an outfit worn by Rihanna. “I was like, ‘Oh my god, I love this outfit, I wanna go with this outfit let me go show my mom,’ and I was like, ‘Mom, mom, mom, I wanna wear this, it’s cool, I love it, oh my god.'” With the help of a family friend the teenager crafted her ensemble. The dark green outfit featured a plunging neckline and “wing-like” attachments under the arms. Her prom night was a hit. “Everybody was saying, ‘Oh my god, I love it, it looks nice your body looks good it’s different,'” Alexis said. But the next day photos of some of her poses in the outfit began to spread on social media. On Twitter, the hashtag #PromBat began to trend, complete with altered photographs, mocking the young girl’s outfit. But what was, perhaps, most disturbing to Alexis was a tweet from her now former idol, Rihanna, who posted a photo of herself wearing the dress (with caption “IG”) alongside a photo of Alexis in her dress (with caption “Real Life”) and a sad face. In another tweet, Rihanna posted a photo of the teen alongside the bat-like logo of the Wu-Tang clan. “I was very offended,” Alexis said of Rihanna’s tweets. “Why throw shade on it when you had on the exact same thing. The poses was different but the outfit wasn’t.” Five days after the prom the cyberbullying showed no signs of relenting. Alexis says she is now afraid to show her face, though she’s not afraid to speak her mind, especially when it comes to Rihanna. “She don’t love her fans like she says she does,” Alexis said. Now Alexis is getting a huge following herself and next year she will be different at prom — but she won’t be going as Rihanna.