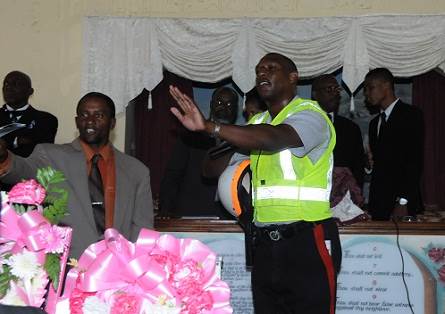 Print this page Email A F
MANCHESTER, Jamaica — What started out as a calm and solemn occasion at the Lititz Seventh Day Adventist Church to say farewell to 18-year-old Kimberley Simpson, turned into a chaotic scene between members from both sides of her family on Sunday.

Young Simpson was chopped to death on November 29 last year, allegedly at the hands of Rohan Thomas, the father of her two -year-old son, following stories of carnal abuse and domestic violence.

Her murder drew national attention as it took an eight hour stand-off between police and angry residents to prevent Thomas from being the victim of ‘jungle justice’.

However, it was a dispute between members of Simpson’s mother and her father’s side of family that prompted the uproar Sunday, followed by a walk-out at the thanksgiving service.

It took several attempts for Constable Oral Williams of the Santa Cruz Police Station and church officials to restore some amount of calm for the service to continue.

A family member of Simpson’s father told OBSERVER ONLINE that the eulogy was interrupted because disregard was shown for her father as his name was not mentioned.

Continuing to show their disapproval of the situation, some relatives of Simpson’s father stayed on the outside of the church for the remainder of the service.

They also refused to go to the graveside at the family plot in Content District, where Simpson lived with her maternal grandmother.