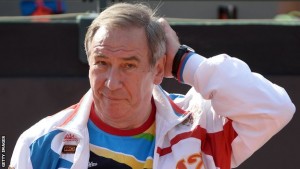 Russian Tennis Federation president Shamil Tarpischev has been fined $25,000 (£15,500) for referring to Serena and Venus Williams as “the Williams brothers” on a TV chat show.
Tarpischev also received a one-year ban from involvement in the women’s tour.
Women’s Tennis Association (WTA) chief executive Stacy Allaster said the comments were “insulting, demeaning and have absolutely no place in our sport”.
But Tarpischev claimed it was a “joke” with no “malicious intent”.
He added in a statement: “I didn’t want to offend any athlete with my words. I regret that this joke has garnered so much attention. I don’t think this incident deserves so much fuss.”
Tarpischev added the Williams sisters are “outstanding athletes” who “personify strength and perseverance”.
World number one Serena, 33, has won 18 Grand Slam singles titles, while 34-year-old Venus has won seven.
Serena & Venus Williams
Serena & Venus Williams have won 13 Grand Slam doubles titles together
Allaster said: “Mr Tarpischev’s statements questioning their genders tarnish our great game and two of our champions.
“His derogatory remarks deserve to be condemned and he will be sanctioned.”
Dave Haggerty, president of the United States Tennis Association, called on Tarpischev to apologise.
“As the president of the Russian Tennis Federation and a member of the International Olympic Committee, Mr Tarpischev is expected to conduct himself with the highest degree of integrity and sportsmanship,” Haggerty said.
“Unfortunately, his comments do not embody either of these traits and in fact were reprehensible.”