Target – ‘Scammer’ Puts Out Hit On Anti-Lottery Task Force Boss; Cop Says He Is Not Worried 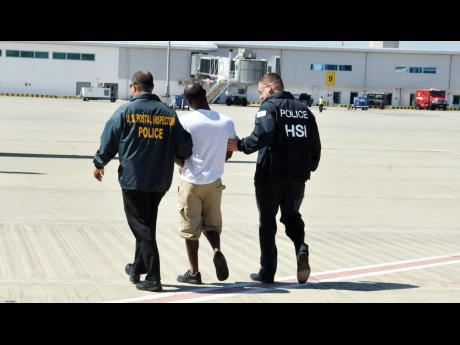 A top-tier leader in the illicit lottery scam who is said to be facing an extradition warrant issued by the United States government has reportedly placed a bounty on the head of Sergeant Kevin Watson, who heads the local Anti-Lottery Scam Task Force.

“Based on intelligence that has come to our attention, this man (the unnamed scammer) has paid over a large sum of money to a gang in the western city to kill Sergeant Watson,” a high-level police source told The Gleaner yesterday. “We consider this as a credible threat and we are putting the requisite measures in place to ensure the safety of Sergeant Watson.”

While not giving away important details, the police source told The Gleaner that the scammer was named on a list of alleged perpetrators for whom the US government has issued extradition warrants in recent months. He said eight of the persons on the list have already been apprehended.

“This man is now on the run, but we are tracking him,” the police source said. “As you might know, these guys have a lot of resources at their disposal, so they are able to move from one location to another with relative ease … . Nonetheless, we hope we will catch up to him sooner than later.”

The police source said he believed the amount was substantial, because the offer was enough to attract the attention of a major gang.

“Our understanding is that it is much more than a million dollars … . It could be as much as $5 million,” the source said. “We also understand that the money has already been paid to the gang, which is based in one of Montego Bay’s inner-city communities but has ties to Matthews Lane in Kingston.”

When Watson was contacted about the threat yesterday, he told The Gleaner that he was aware of it and had started taking extra precautions to protect himself.

“I have been involved as a witness in the overseas cases against some of the scammers who have been extradited, so I guess that makes me a target for their cronies and the other scammers who are now on the run,” said Watson. “When I joined the police force, I knew the risk I was taking, so while I am naturally concerned, I am not worried.

“Scamming is doing significant harm to Jamaica’s international image and is posing a threat to established industries such as tourism and the BPO (business process outsourcing) sectors, so, as a patriotic Jamaican, I want to do something about it,” said Watson. “This threat only makes me more determined to go out and apprehend these scammers so that they can face justice.”

The lottery scam is an illicit scheme through which local con artists induce unsuspecting Americans, especially the elderly, into sending them money under the guise that they have won a multimillion-dollar Jamaican lottery and need to pay processing fees to have the funds released.