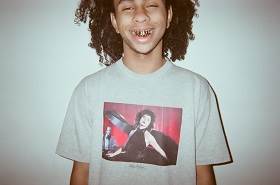 It’s true—Robb Bank$’ dad is Shaggy. If you spend a lot of time with hardboiled Tumblr rap sleuths this is likely old news. If you don’t, here’s the Cliff’s Notes of the whole affair: rising Floridian MC and SpaceGhostPurrp affiliate denies rumours of paternal kinship with Mr. Boombastic, changes his tune when evidence surfaces. Bank$ laid doubts to rest when he used a photograph of his father for the cover of last months’ mixtape Tha City.

Clearly, the internet likes to essentialize. Anonymous teenage Colombos claim that celebrity lineage invalidates Bank$ street persona, calling him a poser who paid for fame. Truth, though, is always stranger than fiction. Talking to Bank$ on the phone for an hour, a complex picture of an artist searching for himself in a vortex of internet gangsters, absent father figures, real gangsters, and fake lean emerges. One thing’s for sure: he’s no Gabe Day. Check out our premiere of his video for “On Me” and see for yourself.