SHE SEH HER SON IS IN BONDAGE 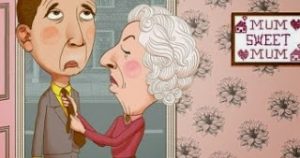 Help save my son from this bondage!

I implore you and your numerous readers who are mothers who will surely understand my plight to please help me. I don’t know what to do and I have never seen a woman as devilish as my daughter– in-law.

Her effrontery scares me and I don’t know how to save my son from her claws, even if I could, where would he go or how would he start his life again, He has been reduced to less man and I wonder if his dignity is still intact.

When they started their relationship, I complained about her, but my son would not listen. In fact, at a level, I was branded a witch even by my own son and he actually asked me not to come to his house again.

They both attended the same higher institution and she became pregnant for my son during her second year in school. I can say that year was the toughest year we had, because when her parents found out she was pregnant, they made life miserable for my son and his entire family.

Despite the fact that they are very comfortable, her father insisted that since my son had impregnated her, she had become our responsibility. They knew that we were only comfortable, but not rich, but to the glory of God, we were able to see her through school and even to youth service.

The fact that we had to train the two of them through the university was a little heavy on our finances, coupled with the fact that we also had to be responsible for the new born baby. This led to the fact that my other children had to learn different trades and could not further their education. They all did not get pass secondary school.

My son realised this and the sacrifice his siblings made for him and was ready to help them but his wife would not allow him.

After his Youth Service, he secured a very good job, and after working for about two years he felt it was time to marry Bunmi properly. At this time, I had seen some signs that she would not make a good wife, I raised this issue with my husband and son, but they said there was nothing that could be done about it and if she were to be my own daughter, how would I feel, if the father of her baby refused to marry her?

I consented and started praying for my son, as there was nothing else I could do. She however began to show her true colour when I was asked to come over and help take care of the child she had immediately after they got wedded.

Can you believe that Bunmi would leave me in the house and go to work without food? She would lock the kitchen and store and instruct her cousin who lives with her not to give me food. Several times, I have had to eat the food meant for her cousin as the little girl out of pity would give her food to me.

Apart from this, she would also instruct the little girl not to allow me carry the baby. I really do not know why she hated me this much. I raised this issue with my son, but he pleaded with me to be patient for his sake, he then resolved to bringing food home for me after he must have dropped her off in the office.

This was how I stayed till I went back to my house. During the time I was with them, I fell ill and I needed to go to the hospital, she refused to allow my son take me to his office hospital. Her refusal led to a big fight between them and if Sam my son had not stood his ground, I wouldn’t have received treatment at the hospital.

Her argument was that the facility they had at the hospital was meant for Sam and his nuclear family alone. Imagine that, this was not a hospital they had to pay cash and it was my son’s company that would pay the bills.

After I left, any of my children who went to see their brother was sent back. At a level, Sam told his siblings to see him at the office and if any one of them had to sleep over, he would lodge them in the hotel.

When Sam’s immediate sibling wanted to get married, Bunmi caused a lot of problems because she said that Sam footed all the bills, which was a lie any way. Few weeks after his younger brother’s wedding, Sam lost his job. Nobody thought anything of this. It took him time before he could get another job. Fortunately, he got a job outside Lagos and this gave his siblings a degree of freedom to see him. It was at this time that Sam started construction of his own house, he did not tell us until the project was almost completed and he pleaded that we should not allow Bunmi know that he told us.

She had no choice but to know that we knew about the house when we (my husband and I) had to visit them after they moved. She instructed her children not to greet us or even take any of the things we gave to them. The most painful thing; however was that we met her own mother and two other siblings there. We learnt her mother was sick and she had been around for a while.

Sam, lost another job that very week that we visited them. Even at this level, no one thought of anything until it became a trend that any time Bunmi learnt that Sam did anything for his siblings, or his parents he would lose his job or something would happen to him.

At the count of the fifth job, I raised an alarm and my husband and I sort spiritual aid. It was then we learnt that Bunmi was responsible for what had been happening. As at then, Sam had almost become a recluse, living from her hand out. He would do the household chores and school runs while she went to work. He couldn’t do anything without asking her for money.

The saddest thing however was that they had to sell my son’s building to settle a bank debt that her father incurred before he died to avoid the bank taking over her father’s house in their home town. Can you imagine that? Yet my son saw nothing wrong in this.

It got to a stage that I had to confront Bunmi about her evil deed. I was shocked that she did not even try to deny it. She was bold enough to tell me that my son would remain that way until he learnt to be obedient to her. His offence however, is the fact that he insisted on taking care of his family after she had warned him to stop.

She now has three female children for my son, she had a son who died at birth and typically, I was accused of killing the baby. I never even knew she was pregnant as at that time. Most of the things she does are to her mother’s knowledge because she practically leaves with them.