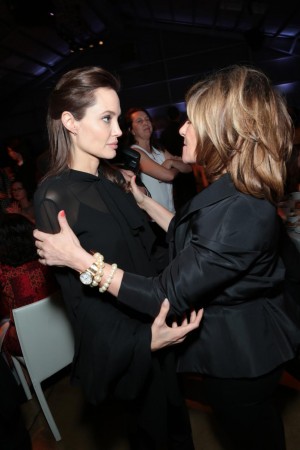 Denzel Blacklisted! Sony Execs Warned Not To Cast Washington In Big Flicks Because Black Leads
After President Obama, Kevin Hart, and Angelina Jolie came under fire from racist Sony executives, RadarOnline.com has learned that Denzel Washington is the latest target to be revealed in the explosive hacker email leak. According to emails from the execs, two-time Oscar winner Washington should not be cast in films that will get play overseas — because he is black.
The unbelievable e-mail thread was sent soon after Sony released Washington’s latest film The Equalizer, and was posted online by hackers who are demanding the studio not release The Interview, a comedy about the assassination of North Korea’s dictator.
The producer who sent the e-mail to Sony Chairman Michael Lynton said he or she hoped the incredible statement wasn’t “inappropriate or provocative.” But the producer — whose name was erased from the emails — suggested Sony should avoid casting black actors to appeal to an international market that the producer deemed “racist.”
PHOTOS: Hollywood’s Most Hated Celebs! 57 Stars The World Can’t Stand
“No, I am not saying The Equalizer should not have been made or that African American actors should not have been used (I personally think Denzel is the best actor of his generation),” the producer wrote.

“Casting him is saying we’re ok with a double if the picture works,” the producer wrote, using a baseball analogy. “He’s reliable at the domestic [box office], safe, but has not had a huge success in years. I believe whenever possible the non event pictures, extra ‘bets’ should have a large inherent upside and be made for the right price. Here there isn’t a large inherent upside.”
Washington’s The Equalizer grossed $191 million at theaters worldwide, with 47% of the ticket sales coming from outside of the United States. Still, the e-mail chain suggested that the overseas box office percentage was not good enough. Other films should expect 65% of the sales abroad, the analysis said. The reason for the disparity? According to the producer, it was Washington’s race.

PHOTOS: Hollywood’s Most Shocking Fights & Secret Affairs Exposed
“I believe that the international motion picture audience is racist — in general pictures with an African American lead don’t play well overseas,” the producer wrote. “But Sony sometimes seems to disregard that a picture must work well internationally to both maximize returns and reduce risk, especially pics with decent size budgets.”
An Equalizer sequel, which another e-mail said was set for 2017, would be “a double, with a remote chance of a home run,” the producer wrote.
Along with slamming Washington’s box office draw, the analysis also took a hit at Adam Sandler and Kevin James, suggesting Sony is also swinging for a double and not a home run by casting them in the upcoming film Pixels. The email suggested that Sony “may not have had much choice without blowing the relationship with Sandler, and they want another Grownups, although after That’s My Boy they could have dumped him.”
PHOTOS: Sony Hack Exposes These 11 Stars’ Secret Aliases
Previous emails exposed racist jokes about President Obama, and a racist joke about the trend of white celebrities like Angelina Jolie and Madonna adopting black babies.
Another chain revealed that Alex Trebek almost quit Jeopardy! over a standoff with the mother of a Jeopardy! Kids contestant.
Story developing