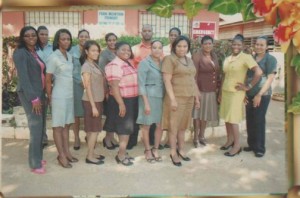 The male companion of a St Elizabeth teacher killed at their home early this morning is now said to be in a stable condition in hospital.
Twenty-nine-year-old Kerrion Powell, teacher at the Park Mountain Primary school in Santa Cruz, is suspected to have died of poisoning administered to both her and her companion by intruders who entered the home in the wee hours Wednesday morning.
The companion, from his hospital bed, said that the ordeal started about 3:00 am when they heard strange sounds and called the police. The police never came and they both eventually fell asleep, he said.
He added that they awoke about 6:00 am and Powell was getting ready for school when men barged into the room and threw a powdery substance all over him. According to Powell’s companion the intruders took her to another section of the house.
Neighbours later saw Powell foaming at the mouth and the couple taken to hospital where she was pronounced dead and her companion admitted.
Paul Henry

0 thoughts on “ST ELIZABETH TEACHERS GIVEN POISON BY INTRUDERS”