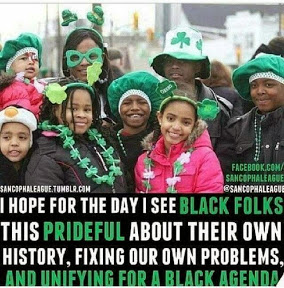 So Called Black people SHOULD OR SHOULDN’T Celebrate St. Patrick’s day?A quick historical and biblical perspective.Do not celebrate the massacre of Melaninated people.In ancient Egypt they had this thing called the Uraeus, its the head dress with a snake in the middle. The Druids Europeans from Ireland was introduced to Ancient Kemet (Egyptian) philosophy by a very short African people called the Twa (Pygmy people) who migrated there from Africa and wore the Uraeus head dress. Pope Celestine V commission (Maewyn Succat) St. Patrick who was a ex-British slave to go into Ireland and build Catholic Churches.
St. Patrick (Maewyn Succat) is credit in history books for driving the snakes out of Ireland. This is symbolic language think about it? Why would the Catholic Church make someone a saint for driving snakes out of Ireland? He didn’t drive snakes out of Ireland what he did was killed over 200,000 people who had taken on and understood the Ancient African philosophical system of MAAT. These Irish and Twa (Pygmy people) was wearing the Uraeus/snake head dress didn’t accept St. Patrick (Maewyn Succat) teachings of Catholicism so St Patrick killed them. For expanding the church and killing people who wouldn’t take on the Roman Catholic faith Pope Celestine V coordinated and made him a “Saint” because he set up over 300 churches in Ireland after getting rid of the Druids and the Twa (Pygmy people) who wore the Uraeus/snake head dress. He didn’t drive out snakes as the history books states he committed genocide on a people. When you see people wearing shamrocks and talk about leprechaun it was no leprechauns it was the Twa (Pygmy people) from Africa they are talking about.

A people who had the Ancient Kemet (Egypt) knowledge who was also considered magicians by the ignorant. Now they called them leprechauns and have your children eating lucky charms cereal. This is the History of St Patrick’s Day.If we don’t remove these behaviors in our childhood then these traditions will carry on to their adulthood.Proverbs 22:6Train up a child in the way he should go: and when he is old, he will not depart from it.Mark 7:1313 Making the word of God of none effect through your tradition, which ye have delivered: and many such like things do ye.Hebrews 10:2626 For if we go on deliberately and willingly sinning after once acquiring the knowledge of the Truth, there is no longer any sacrifice left to atone for [our] sins [no further offering to which to look forward].Job 14:44 Who can bring a clean thing out of an unclean? No one!