STATEMENT FROM THE SUV FAMILY ON THE BIKER INCIDENT 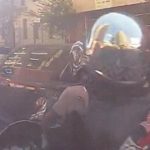 NEW YORK (MYFOXNY) –
The family of Alexian Lien, the driver of an SUV that was involved in an accident with a pack of motorcyclists on Manhattan’s West Side that ended in a chase and beating has released a statement.

The statement starts by saying: “Our plan last Sunday was to celebrate our wedding anniversary by having a nice family day out with our two-year-old daughter. Unfortunately, instead, we were placed in grave danger by a mob of reckless and violent motorcyclists.”

The statement was released Thursday morning be the law firm of Massimo & Panetta on behalf of the family.

It goes on to say: “Our sympathies go out to the injured motorcyclist and his family. However, we were faced with a life-threatening situation, and my husband was forced under the circumstances to take the actions that he did in order to protect the lives of our entire family. Our fear for our lives was confirmed when the incident ended with the ruthless and brutal attack on my husband, me, and, most importantly, our two-year-old child. We know in our hearts that we could not have done anything differently, and we believe that anyone faced with this sort of grave danger would have taken the same course of action in order to protect their family.”

The statement continues: “We would like to thank the brave citizens who risked their own safety to intervene on our behalf. They truly helped save our lives and prevented my husband from suffering further injury. We also appreciate and are moved by the outpouring of love and support so many have expressed here in New York and around the country.”

The family said that any further inquries in regard to the incident should be directed to their lawyers.

The statement ends with: “We would ask that the public and the media to respect our privacy at this difficult time and allow my husband to recover from his injuries.”

Police have arrested two of the bikers involved in the initial incident that lead to the vicious attack. But some of the bikers and their supporters say the driver is not the victim because one of the bikers he ran over is in a coma and could be paralyzed.

Video posted to YouTube from the helmet camera worn by a motorcyclist shows a pack of bikers attacking the driver of an SUV following a fender bender on the West Side Highway on Sunday afternoon.

The driver of the black Range Rover — Alexian Lien, 33 — was with his wife and young child inside when he struck a motorcycle that was in front of his car, police said. In the video, Lien is seen stopping the SUV and then speeding away and striking three motorcycles when the group began to damage his SUV.

Once the driver got off the highway at West 178th St. in Washington Heights the bikers attacked.

One person is seen taking off his helmet and striking the vehicle while another biker tries to punch through a window in the backseat where the child was seated.

The biker breaks through the window and Lien is dragged out of the car and assaulted, said NYPD Commissioner Ray Kelly. Lien suffered cuts to the face.