Accusations that a 7-year-old Marietta, Georgia, boy had salt paddled so hard into him that he bled through his pants at school led police to arrest his father and stepmother. 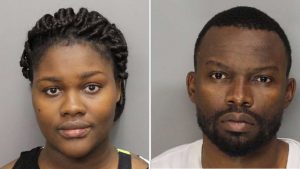 A grey nurse shark, which is harmless to humans, swims in shallow waters. A Kentucky teenager was bitten on Sunday by an unknown species of shark in the waters off Destin, Florida.
Teen recovering from terrifying shark attack in Gulf of Mexico
The father Ohandjo Patience Ohandjo and stepmother Adaugo Queen Ohandjo bonded out of Cobb County jail on their felony charges Thursday.

Police booked the father on a second-degree child cruelty charge Wednesday because they say he failed to get his son any medical help. But the stepmother faces a first-degree count because police say she did the actual spanking.

Marietta police declined to answer any questions about the case, and the warrant does not say what led to the alleged paddling.

According to the warrant, the woman ordered the boy to take his pants off before rubbing salt on his buttocks and spanking him with a red piece of wood.

The boy, with blood seeping through his pants, couldn’t sit in his chair at school Wednesday, the warrant said.

“I think that was a characterization,” said the couple’s Marietta attorney John Nwosu.

“The whole accusation is out of context,” he said before declining to say what preceded the alleged spanking.

The boy had been living with his biological mother who “could not handle the child,” he said.

The couple offered to take the boy, who moved in with them last month, Nwosu said.

“The child is having a lot of issues at school, and they are trying to adjust with this new living condition,” the attorney said.

Nwosu said the boy’s father started a trucking company and the stepmother is in medical school at Morehouse College.

“These are two young good parents, enterprising parents,” he said.

The attorney added that the boy has “some skin disease” that might have “aggravated the alleged injury” but didn’t explain further.

As a condition of their bonds — which was $21,500 between the two of them — a judge ordered they can’t have contact with the boy nor the stepmother’s two children, ages 1 and 3.

The woman was also charged with obstructing law enforcement because she allegedly didn’t take her children to Safepath, the children’s advocacy center, as ordered by court.

When officers asked where the children were, she told them they were with her brother but wouldn’t give police the address.

“When this case goes through the normal process, they will be vindicated of every accusation,” Nwosu said.