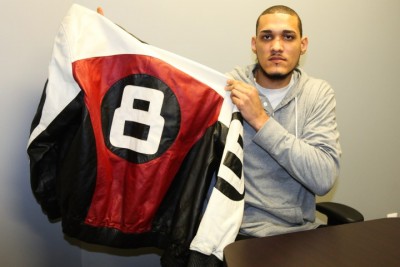 The man who was attacked on an F train by women who mocked his 1980s-style 8-ball jacket will not be charged with assault for hitting one of them because he acted in self-defense, the Brooklyn District Attorney’s Office said on Wednesday.
Jorge Peña, 25, hailed the news that he’s been cleared criminally. He also insisted that he was in the right from a fashion perspective.
He told The Post that the jacket is actually highly fashionable right now and was worn by the rapper TI in a recent music video.
“I love this jacket,” Peña said. “But I don’t think I can wear it anymore.
“People will just know me because of it and what happened.”
Peña — a former pro baseball prospect — was riding the train home from work Friday night when a pack of wild women started mocking his clothes and then one pulled off her stiletto boot and hit him in the head.
“I never slapped anyone before. Especially a girl,” said the 6-foot-6 Peña, 25.
“But when I saw that blood, I couldn’t take it. She attacked me like a man.”
The woman who allegedly hit Peña with her stiletto boot, Danay Howard, 21, and Shanique Campbell, 20, who clobbered Peña with her purse, were charged with felony assault.
On the YouTube video, they are seen mocking Peña and knocking the phone from the hand of the person filming them before Howard attacks Peña and he responds by slapping her.
“You got a wack 8-ball jacket that came out in 1990,” Howard yells at Peña. “Get your money game up.”
The jacket was named one of the “Greatest Fashion Trends” of the ’90s by Complex Magazine and was featured on an episode of “Seinfeld.”
Modal TriggerThe video of the subway incident has racked up more than 4 million views since it was posted Sunday.
“Thank God for smartphones,” said defense attorney Cary London, of the law firm London Indusi.
“The DA’s office was able to have all of the information in front of them at an early stage to show that our client did nothing wrong and acted in self-defense.”
Peña plans to sue the city over his four days spent in jail after his arrest, said London.
A DA spokesperson confirmed that the charges against Peña were dropped once it was clear he acted in self-defense.