A lunch-hour trip to Subway ended with a Layton City police officer being treated for ingesting illegal drugs after a restaurant employee spiked his drink, Layton detectives tell KUTV.

Tanis Ukena, 18, is in custody at the Davis County jail on suspicion of Surreptitious Administering of Poisonous Substance. According to a narrative by Layton Police Detective Kelly Rushton, Ukena was working at a Subway when a police sergeant in a marked police cruiser ordered a sandwich and drink at the drive-thru.

Ukena prepared the sergeant’s drink and was seen with something in his hand as he stepped out of view of a surveillance camera for an extended period of time before returning and handing the officer the drink, according to Layton Police. 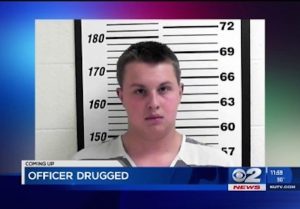 Shortly after leaving the drive-thru, the officer began to feel sick and returned to the Layton police headquarters where he sought help from other officers.

Detectives were contacted and tested the Subway drink. An initial result from an ion scanner analysis showed the drink was spiked with meth and THC, Detective Rushton’s narrative said.

The officer was treated by paramedics and detectives tracked down Ukena. According to Detective Rushton, Ukena did not admit to anything and was not cooperative with their investigation
Police, however, said the surveillance video showed Ukena bent over the officer’s drink and they arrested him.

The officer was hospitalized but has since been released. He has not yet returned to duty.