Marketing and public relations specialist Tara Playfair-Scott is fighting breast cancer with all her might.

In a revelation to the Jamaica Observer recently, Playfair-Scott, manager of international athlete Asafa Powell, disclosed that she had not only been jolted by the occurrence, but had just undergone treatment in Mexico, at the start of her journey to fight the deadly disease that afflicts millions of women around the world, but which, with adequate treatment, can be contained and controlled.

It is that desire to convince women around the globe, but specifically those in Jamaica, to become more conscious and aware of the danger of breast cancer, that nudged her to share her story about a disease that is one of the leading causes of death among women in this north Caribbean island.

In the first of a four-part series, avid sports fan Playfair-Scott, who holds a Bachelor’s degree in political science, and a Master’s degree in communications, and attended both Howard University and Florida International University, outlines her journey which includes a treatment regime at a health facility in Mexico. 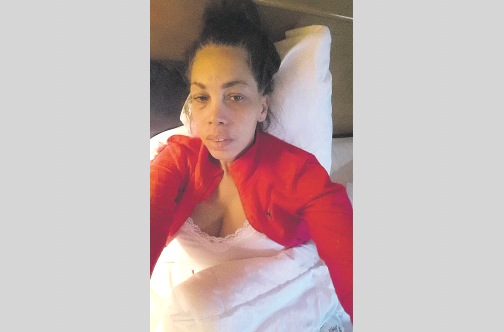 Here, in her own words, is Playfair-Scott’s own account of her first chemotheraphy treatment, the taste of an awkward world, and a situation that will change her life forever:

It’s 2:00 pm on Friday, July 1 and I’m sitting in a Lazee Boy watching the first few drops of medication make their way from a bottle, down the IV and into my arm.

I literally felt it enter my vein… It just got real. My first chemo treatment had just begun.

I could feel the effects of the anti-nausea and allergy meds they gave me before the chemo to combat any side effects swirling around inside me.

Had I made a mistake doing this without any friends or family here?

Too late now Tara, I told myself … Then I heard the doctor talking to me “You okay Tara?” … I looked over at him and he was smiling, “You feel sleepy? Are you having pain? That’s the medication it can make you sleepy?”

I reminded myself this was all temporary and merely a bump in the road of life – it would pass. “I’m okay, Doc … So have you ever been to Valle de Guadalupe?” He looked at me shocked, then laughed and said: “Yes, almost every weekend.” He began to tell me about the best restaurants and wineries there. I listened intently and imagined I was there vs here … oh, the power of a good imagination.

After a little more conversation, a few Whatsapp conversations and another episode of Top of The Lake on Netflix it was time for my dose of insulin as part of my low dose IPT (Insulin Potentiate Therapy) chemo treatment and this is where I questioned the sanity of what I was doing again.

What if I went into insulin shock and died right there? The nurse had taken my blood sugar level before and the reading was 88. As she went to inject the insulin into the IV, I closed my eyes and said a little prayer. “Lord, thank you for this treatment. Let it work as it should!”

The nurse reminded me that in a little while I would need to eat in order to bring my insulin levels back up, and the doctor came back in to see how I was feeling.

I felt a little light-headed, but overall I felt fine (and clearly I was alive).

I saw the nurse picking up the glucose tester and reaching for a strip; I stuck my finger out automatically. Honestly I was curious to see what the reading was Click, squeeze… the blood fell onto the strip. I looked at her she said “55”. I heard the doctor say “Good, Tara!” She handed me a plastic cup with juice… “Drink”. I swallowed the sticky sweetness of the nectar… Just a bump in the road I whispered and I opened the container and reached for my sandwich — first treatment down, three more to go!

I spent the weekend in bed with slight nausea, a little light-headedness and severe insomnia but no horrific side effects. I was grateful.

On Sunday I woke up and felt some pain but on Monday it was worse. I called the doctor, he said I should come in … I started to panic. Had I made a huge mistake? What was I thinking? Then, as I was in the shower I prayed about it and realised that panicking and doubting and negativity were not helpful and I had to trust the process, and God. So I prayed again and changed my mindset, got dressed and went to see the doctor. He said he believed the tumour was dying but because it was fairly sizable — the reaction would be different than a smaller tumour — that we would watch it but if there was no change or it worsened I may not be able to do my second treatment on Friday. WHAT??!!

I was to return Wednesday to check on it and also to do a blood test to check my white cell count levels, both of which would determine me having my second chemo treatment.

By Wednesday I was excited to go in to see the doctor, as I knew the tumour had shrunk. I could feel the difference but I wanted the doctors to confirm it… As I walked in, the doctor said: “You’re looking very happy” I said, “Yea, I think this thing has shrunk” … five minutes later he said “Wow, Tara! You are reacting very well and very fast… This has shrunk at least 30 per cent”. I beamed with pride … as if I had just got an A on a test and replied, “yea well I’m Jamaican; we like to guh hard!”

I did three additional treatments before heading back to Jamaica with the intention of doing my surgery and any necessary follow-up treatments. This life-changing journey had begun.