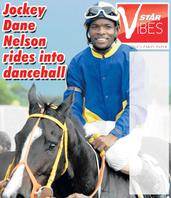 Champion Jockey Dane Nelson is adding the profession of music production to his résumé, as he officially sets foot into the music industry with the release of his debut dancehall rhythm called the Ice Box.

The popular sports personality is the owner of his own music-production company called Warrior Chief Production and has recorded several of Jamaica’s mainstream artistes and fresh acts, including I-Octane, T-Nez, Busy Signal, Laden, Chino, Luciano, GT, OC and Maestro Don.

Dane Nelson also manages dancehall artistes GT and Maestro Don and disclosed that he developed a liking for music because of his affiliation with Freddie McGregor and slain record producer Patrick ‘Roach’ Samuels.

“Roach and Casper were very influential. (Also), I used to go on stage with Freddie and that experience always gave me a good feeling. So I developed a love for music. Roach introduced me to a lot of producers as well as Casper, right now a mi and Casper a par,” he said.

According to the jockey, the Ice Box rhythm has been receiving a lot of support in the music industry and has been added to several radio playlists. He also says his colleagues from the sports fraternity were equally supportive.

“I am bringing some young talent because I am representing the young generation of producers and we are bringing creativity to the industry,” he said.

The jockey/producer disclosed that his sport was still his priority, however, to keep things functional, he has formed a team to execute the daily activities of his record label when he is not available.

“God is not giving us more than what we can bear so we are just working because everything takes time,” he said.

Dane Nelson recently joined a select band of riders to reach the impressive milestone of 700 career wins on the track.