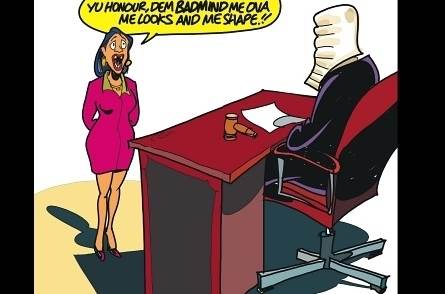 A young woman who appeared to be still seething from an attack which left her without two teeth, surprised the Corporate Area Resident Magistrate’s last week when she said that the accused kicked out her teeth because he was envious of her beauty and physique.

“Dem bad-mind me ova me looks and me shape,” the angry complainant blurted as the accused, Oshaine Williams, stood explaining his account of the incident.

But her comment did not go unnoticed by Senior Magistrate Judith Pusey, who, in reprimanding her for not properly addressing the court, told her: “I am not interested in your looks and shape, and I don’t envy you for it, but please speak to me with respect.”

Williams, however, denied that he had attacked her, claiming that another man had punched her in the mouth.

According to Williams, she was the one who had approached him, calling him “dutty bwoy” and pulling out a bottle of acid to throw on him, causing him to run.

But the complainant insisted that Williams kicked her down after he and three other men attacked her.

“Him kick me inna me belly and me knock out, and when me revive me find miself inna hospital, and when me go look inna de glass me see him footprint inna me face and me see me teeth dem gone,” she said.

Pusey then scheduled the matter for mention on December 6.

Williams, who pleaded not guilty to assault occasioning bodily harm, had his bail extended.

3 thoughts on “MNL-“Dem bad-mind me ova me looks and me shape,””