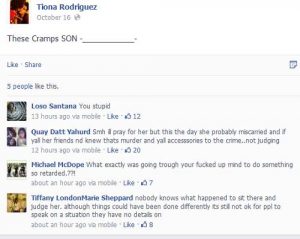 NEW YORK (CBSNewYork/AP) – An autopsy is planned on a fetus found in a teenager’s shopping bag at a store in Manhattan in part to determine whether it was alive or dead when delivered.

Tiona Rodriguez and Francis Estevez, both 17, were inside a Victoria’s Secret lingerie store in Midtown Thursday when they were suspected of shoplifting, police said.

Security guards called police after they noticed a strong odor coming from one of their bags and found the fetus, police said.

Police said it appears Rodriguez was five to six months pregnant when she gave birth on Wednesday. She told officers Thursday she was carrying the human remains because she had delivered a day earlier and didn’t know what to do, authorities said.

Thursday night, police searched Rodriguez’s apartment. Friends and neighbors say they had no idea she was pregnant. The Bushwick Academy student already has a 2-year-old son.

“I couldn’t really tell because she’s a little heavyset, so I wouldn’t know if she was pregnant, pregnant or that’s just her,” neighbor Ramon Acosta said.

It’s unclear if the baby was alive or stillborn or if Rodriguez even knew she was pregnant. Late Wednesday night, she posted on her Facebook page complaining about “these cramps.”

Both girls have been arrested on charges of petit larceny. Rodriguez has been hospitalized and the other teen was being questioned by police. More serious charges could follow.