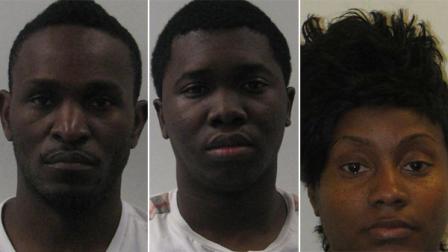 State police and the Attorney General’s Office announced today the dismantling of an international drug ring that partially operated in New Jersey.

Of the nine people arrested, two are from Cherry Hill — including the network’s alleged leader — and another is from Mount Laurel. Three others are also from New Jersey.

The network, which officials say smuggled large amounts of cocaine into the country, was based in Jamaica and also operated in California.

The lengthy investigation by multiple agencies, dubbed “Operation Next Day Air,” began in March 2011, after two packages, each containing 4 kilograms of cocaine, were seized from a Marlton mail center.

Officials say Andrew Davis, a 34-year-old from Jamaica, led the network with the help of his 22-year-old brother, Kemar. The younger brother allegedly orchestrated transactions from Los Angeles.

Marsha Bernard, 28, of Cherry Hill was charged with leading the drug-trafficking network, among other offenses. Authorities said Bernard received much of the cocaine and sold it to drug traffickers and customers.

Investigators documented meetings about the transfer of the cocaine and acted on several search warrants in the area, leading to the March arrests of several targets, including Bernard. The investigation continued until Andrew Davis’ arrest in September.

Those arrested on drug charges include: James McBride, 40, of Mount Laurel; Sidonie McLeod, 28, of Cherry Hill; Angel Rivera, 35, and Juan Cortez, 41, both of Vineland; and 34-year-old Shelly Ann Brown of Trenton.

A 33-year-old woman from Philadelphia, Hioka Myrie, was charged with conspiracy.