THANK YOU DIGICEL AND KINGALARM 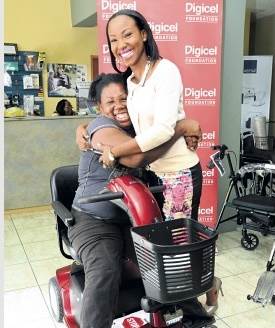 THE physically challenged woman who was robbed of her wheelchair at gunpoint on Spanish Town Road, on Tuesday, can finally smile again after telecommunications company Digicel yesterday presented her with a spanking-new motorised scooter.
KingAlarm has also committed to providing security for her in order to prevent a recurrence of the horrifying ordeal.
The organisations stepped in to help after the Jamaica Observer highlighted the plight of Correta Vincent, who said she was on her way downtown Kingston to purchase goods for the small stall she operates when she was held at gunpoint by men who alighted from a vehicle. They took her from the chair and left her on the sidewalk in the vicinity of the May Pen Cemetery. She was eventually rescued by a handcart operator who transported her downtown.
Yesterday, an obviously elated Vincent was presented with the fully motorised chair by representatives of Digicel Foundation at the offices of Independent Living, Kingston, a facility which supplies items such as power chairs, mobility aids, bath safety devices and semi-electric beds to members of the disabled community.
Programme manager for special needs at Digicel Foundation Judene Hunter said the decision to provide the chair for the 37-year-old mother was made immediately after reading the story.
“Digicel continues to be a major advocate for the special needs community, as officials of the organisation believe that it was an area that deserved much more attention,” said Hunter.
She added that since 2004 the foundation has had a major thrust for improving the quality and quantity of resources that are available to the special needs community.
Hunter said the approximately $250,000-cost of the chair would be sourced from the Digicel Foundation 5K Run for Special Needs, which will be held this Saturday.
“The first-ever night run was aimed at raising funds and increasing awareness about Jamaica’s special needs community,” said Hunter, who also pointed out that several corporate companies have come forward to make cash donations towards the initiative.
Managing Director of KingAlarm John Azar said the company has started discussions with Vincent to provide additional assistance.
“We will be securing her home at no cost, offering her a personal panic button which will allow us to track her movements and respond to a distress signal, as well as discussing other options to provide other forms of security for her,” said Azar.
Yesterday, scores of Jamaicans took to social media to express their interest in helping Vincent.
Meanwhile, however, the police have denied that the incident was previously reported to them.
“We received no reports about such incident. We have no record of a report being made to the police,” said a senior detective from the Denham Town police station.
He explained that since the story appeared was published, police from Denham Town have launched their own probe and have even visited Vincent’s home, but were not convinced of the robbery.
“We have visited the community, spoken to people in the area and we are not convinced that a robbery took place,” the senior cop told the Observer.
The police said they have based their belief on the number of broken-down wheelchairs seen at Vincent’s home, among other things.
However, the response from the police, yesterday, triggered a string of criticisms from vendors and persons claiming to be relatives and friends of Vincent.
“The lady was robbed and when she was talking about the incident a policeman was on the scene in downtown Kingston where she ended up and he said he would look into the matter. It may have been a case where the matter was not reported at the station but a policeman was there,” said one fuming vendor.
One family member adamantly supported the claim made by the physically challenged woman.
“I don’t know what the police saying. It was the morning before she left I saw her in her chair and was later informed that she was robbed,” said Elvis Henry, who identified himself as Vincent’s cousin.
Yesterday, Vincent said she was disappointed by the reports from the police.
“I never did report the incident to the police station but I know what happen to me. I am the one recovering from the incident. The police may not believe me, but I would not tell a lie on myself like that,” said the distraught woman.
She said the out-of-service wheelchairs at her home are those she has used over the more than 20 years since she became disabled.
“People in town know mi, them never see me without mi chair. If I know I never have a chair why would I leave my house, go to the middle of town without a crutch, without anything to move around, just to tell a lie on myself?” the woman queried.
ADVERTISEMENT

0 thoughts on “THANK YOU DIGICEL AND KINGALARM”