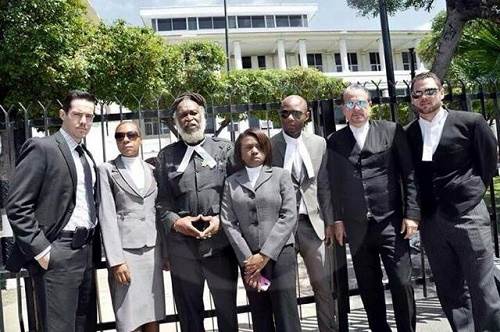 ENTERTAINER Shawn Campbell reportedly refused an offer from the prosecution to plead guilty to accessory before or after the fact of murder.

This was confirmed by his attorney Miguel Lorne and Director of Public Prosecution Paula Llewellyn.

Lorne said his client, known by the stage name ‘Shawn Storm’, was not asked to give any evidence against his co-accused but refused the deal because he was not part of any common design to kill Clive ‘Lizard’ Williams.

Llewellyn confirmed the story. “I was told about it by the prosecutor, Jeremy Taylor. He said he approached his attorney with the offer,” the DPP said.

If he had accepted the offer Campbell would have served a three-year prison sentence.

Campbell, who is also called ‘Sivva’, was last Thursday sentenced to life imprisonment by Justice Lennox Campbell for the murder of Clive ‘Lizard’ Williams. He must serve 25 years before he can be considered for early release.

“He refused because he maintains that he was never involved in any murder and to take that offer would have signalled that he was guilty of participating in murder. I even discussed it with his mother and she said she was glad he refused,” Lorne said.

Campbell was sentenced based on the premise of common design in law, which states that even if a person did not actually commit murder he can be found guilty of participating in the act if he did not voice his objection to the act or acted as a lookout person.

Evidence was presented in court that Campbell sent text messages to his girlfriend, informing her that someone was going to be killed.

The prosecution also argued that Campbell took Williams and the prosecution’s star witness, Lamar ‘Wee’ Chow, to a house owned by Vybz Kartel at Swallowfield in Havendale, St Andrew knowing that they would be killed.

The court was told that Campbell had repeatedly urged Williams and Chow to be calm, after they began acting skittish during a trip from Portmore to Havendale in a taxi driven by a man known only as ‘Need For Speed’.

Chow managed to escape without being harmed and later testified that he saw Williams’ motionless body lying in the living room of the house and Jones holding what appeared to be a block over him.

His evidence weighed heavily on the jury and helped the prosecution to secure a guilty verdict.

Throughout the trial, Campbell appeared dazed at times and when the guilty verdict was read, he grimaced.

However, he appeared more composed during the sentencing hearing and it seemed as if he had come to grips with the fact that he would be spending a long time in prison.

They are expected to appeal the verdict on several grounds, including claims that the evidence was tampered with by police and that they were victims of a plot to sink Vybz Kartel, who is not well liked by some sections of society for his outlandish lyrics and gangster image.

118 Users Online
Back to top