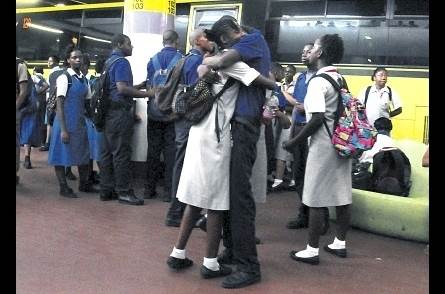 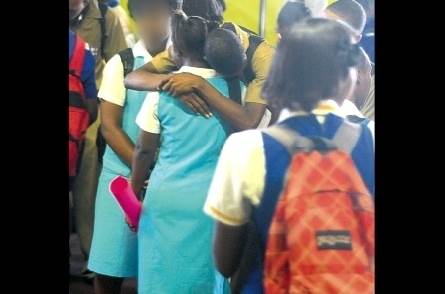 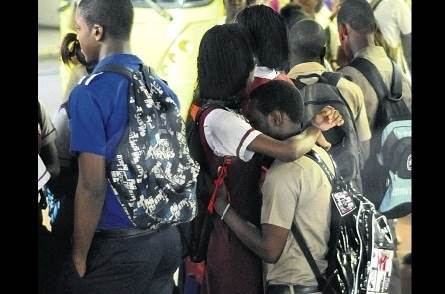 ‘They will not go home until they fight

FIGHTS, sex, robberies and rampant indiscipline have erased the pride that was evident inside the $4.3-billion Half-Way-Tree Transport Centre when it was officially opened in January 2008.

High school students who show no respect for authority and who, according one Jamaica Urban Transit Company (JUTC) official, won’t hesitate to attack and harm adults.

Linval Thompson, the man charged with managing the transport centre on behalf of the State-owned JUTC, said that the unruly behaviour of the teenage students have JUTC staff and the police personnel assigned to keep order in the centre stretched to the limit.

“On a Friday it is just madness,” Thompson told the Jamaica Observer. “The children come here and they do not leave the park until late in the evening. They are involved in all kinds of activities.”

His claim was corroborated by Sergeant April McFarlane, who heads the team of cops assigned to police the centre.

“On a Friday it’s chaos. The students don’t want to leave. They come to the bus park and linger. The girls arrange to meet men they met on the Internet. We have caught children having sex in the bathroom. They fight every day, but on a Friday it gets worse. We have found every form of weapon that you could imagine,” Sergeant McFarlane said.

Last Friday afternoon when the Sunday Observer visited the transport centre, children were seen openly hugging each other.

One boy had his head buried deep in a girl’s bosom, while two girls were seen holding hands in a more than friendly manner. The children embraced and sometimes gyrated against each other in full view of adults, some of whom seemed fearful to reprimand them.

Hundreds of students crammed inside the lower level of the bus centre converted the facility into a beehive of activity. The noise was deafening.

According to Thompson, buses come to the centre and leave almost empty because of the students’ refusal to board them in a timely manner.

That, he said, is causing the JUTC to bleed, as the adults who would normally use the transport centre after work, often leave and take minibuses or illegal route taxis due to the children’s behaviour.

“This is causing us to lose money. The adult fare is way more than the children’s fare, and if they are not taking buses and turning off the adults it puts us in a bad financial position,” he said.

One JUTC supervisor who works on the lower level pointed the Sunday Observer to a fight between two boys who looked to be no more than 12 years old.

The scuffle was quickly broken up by other students.

“I am telling you, it very serious down here. They will not go home until they fight. I have seen boys walking through the crowd with guns. Last week one boy had a gun looking like a Uzi walking through, but he managed to escape the police,” the worker told the Sunday Observer.

He said that girls as young as age 12 pose in suggestive positions with men many years older without shame.

“I saw a 12-year-old with her legs wrapped around a man. When the security talk to her, she run dem wey and said dem can’t tell her what to do as they were not her parents. If the security never use a baton and lick the boy, him wouldn’t run leave the little pickney, and she cuss dem same way,” he said.

He also complained that students, especially the boys, have mugged persons at knifepoint.

“They crowd around you and use their knife to cut off your pocket and take your phone and money. Most evenings we find a whole heap of purses that have been searched and thrown away. We throw away a lot of purses in the evenings,” the worker said.

His claims were substantiated by Thompson, who said that just last week a woman complained that her handbag was cut open and her cellular phone robbed by schoolboys.

The worker also pointed out that it was not wise to reprimand the students as they had no reservations about harming adults.

Funded by a loan from the Belgian Government and built by Jamaican construction workers, under the guidance of Belgian contractors, the transport centre was the source of great pride when it was officially opened shortly after the 2007 general election.

The lower level of the facility boasted bus schedule displays, route maps, security cameras, and ventilators, and at the official opening note was made of the spacious bathrooms.

Speakers encouraged the public to protect the centre, which was expected to bring some amount of order and prestige to the capital city’s mass transport system.

But last Friday, buses at the lower level of the centre, where most of the students hang out in groups, pulled up and were seen leaving with little or no passengers, as the students frolicked.

The students also openly flouted the rules of the centre by standing in the area where the buses drive, refusing to move, even when buses are rolling into and out of the centre.

Thompson said that the students often jump in front of the buses when they are entering and point their fingers, in the manner in which someone would point a gun, at the drivers.

“The girls from prominent high schools do it,” Thompson said.

The police say their hands are tied as a recent ruling by a magistrate in the Family Court has barred them from forcing the children to take the buses in a timely manner.

“They say we cannot force them to take the buses, so we just have to patrol the park and collar those who break the law. On a Friday we have to send for reinforcements,” Thompson said.

Last Friday, the police post was bursting at the seams with students who were held for fighting and other offences.

One Mona High School girl with a large lump on her forehead complained that she was hit with a T-square by a female student from another school while travelling on a bus along Hope Road.

A female cop gave the girl a frozen bag juice to place on the lump as she took the girl’s statement.

She claimed to have got into a fight with another girl on the bus when the girl’s friend attacked and clouted her with the T-square.

Both girls’ parents were summoned and the matter was settled amicably after the parent of the attacker decided to foot the medical bill of the injured girl.

Another girl was warned by McFarlane to stay away from the centre as she seemed to be a magnet for trouble.

As the cop spoke sternly and warned the girl that she was going to be deemed as a child in need of care and protection if she continued down a reckless path, the indignation on the child’s face was evident as she avoided the cop’s eyes and stared at nothing in particular.

A child who is regarded as in need of care and protection will be detained in a juvenile facility as a ward of the State and can be held until he/she reaches age 18.

Eventually, the girl’s mother came and led her out of the transport centre, while chiding her loudly.

In total, four students were booked by the police for fighting, two for possession of an offensive weapon and four for loitering during the time the Sunday Observer spent at the transport centre last Friday.

Sergeant McFarlane blamed bad parenting for the rotten behaviour of some students.

“Some of the children who we detain in the post, when we send for their parents and you see how they behave when they arrive you understand why the child is like that,” she said.

Another cop said that she was surprised to find out the reason why two teenage girls were fighting one evening.

“When I broke up the fight and asked a student of the school they both attend why they were fighting, the student said, ‘Miss, leave them alone, they are lovers’. I was shocked beyond reason,” the female cop said.

Two weeks ago, a female student’s ankle was broken after a bus ran over it.

“The child was pushed by another girl into the path of the bus. We have eyewitness evidence,” Thompson said.

He also rued the breakdown in discipline among students who, he said, will not give up the seats reserved at the front of the buses for the elderly and disabled.

“These students will not give a disabled person or an old person a seat, even though there are seats clearly designated for them. It’s a sad state of affairs,” he said.

Persons who do business in the centre are not exempt from the students’ nefarious behaviour.

The operators of Lifestyle Pharmacy, which is located on the lower level, have employed extra security and only allow three students in the store at any one time to curtail shoplifting.

There is a sign at the door of the pharmacy which boldly displays that rule.

The police had their hands full on Friday, but according to one cop, that was just the tip of the iceberg.

“The thing turn when is Champs time,” the cop said in reference to the annual Boys’ and Girls’ Athletics Championships held at the National Stadium and which sparks intense rivalry among high schools.

“Dem time deh we have to work harder because man from this school don’t want man from that school pon the bus. They commit adult crimes but we [have] to treat them like children,” he said.