THE WONDERS OF BLACK SOAP

o many individuals, black soap or African Black Soap is used for generations as a natural remedy for skin problems such as acne and eczema. Interestingly, some brands of black soap also work for stress control, an expert has said.

Dr Obafemi Jegede, unit coordinator, Traditional Medicine and Belief System, Institute of African Studies, University of Ibadan, said black soaps were veritable means of treating many conditions that afflict the body such as stress, malaria and in improving body’s wellness.

Jegede, who declared that black soap is used as excipients in traditional medicine, said that the type of black soap used for stress control contains other condiments such as extract of bamboo tree.

“It is argued that the bamboo tree is frail looking; but no storm can blow it off. So, its resilience is why it is used in the construction of houses. In traditional medicine, the characteristics of plants are harnessed. So including bamboo extract is to tap into its resilience for stress control,” he said.

Bamboo is one of the most neglected trees, but that is a blessing to mankind. It gives the best of shade and oxygen. Sitting under it gives a serene effect that calms the nerves and allows sound reasoning.

What is African black soap made with? Black soap as it is called locally is typically a combination of the cocoa pod husk, plantain skins, coconut oil, palm oil and essential oils.

Some additional ingredients, depending on the maker of the soap, could be honey to soften skin and shea butter or cocoa butter for extra moisturising properties.

But in the production of the variety of black soap for stress management, he said active, living and potent water, usually collected from a flowing stream, is required for its production.

Dr Jegede, who remarked that many disease conditions can be treated with specially formulated black soaps, said individuals having challenges sleeping only need to take their bath using a decoction made from root of neem, bark of mango and leaves of lime and pawpaw tree and black soap.

In addition, he also mentioned Aboke, a local black soap, which is used for teething problem in children.

In a 2016 study, published in the Journal of Microbiology and Antimicrobial Agents, researchers found that inclusion of brown eggshell powder and Ficus exasperate can help to improve the antibacterial effect of black soap. 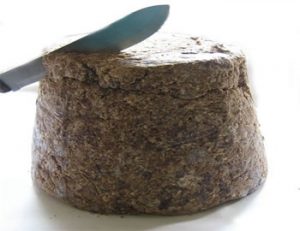 Fine egg shell powder has been used as home remedy for pimples and associated skin problem. Plantain skins and leaves have a high concentration of iron and vitamins A and E.

Gerard Niyondiko, an engineer from Burundi in 2013 invented Faso Soap, a mosquito repellent soap that can prevent malaria infection for up to six hours after use.

Comprised of shea butter, lemongrass, African marigold and other natural resources that are plentiful in Burkina Faso, it is designed to leave an insect-repelling odour on the user’s skin after washing.

The possibilities for Faso Soap don’t end with malaria. Other mosquito transmitted diseases — such as Zika — could also be prevented by the product.

8 thoughts on “THE WONDERS OF BLACK SOAP”