Keep your hands — and opinion — to yourself on the subway.
What began as a young woman taunting a man on the F train devolved into a wild subway brawl when he turned around and slapped the girl in an incident that was caught on video.
The blow knocked the woman back five feet as another man jumped in and exchanged punches with the attacker, according to the undated viral footage, which was uploaded to YouTube on Saturday and already has more than 600,000 views.
The NYPD said it is looking into the incident on the Washington Square station-bound F train, but didn’t have details. 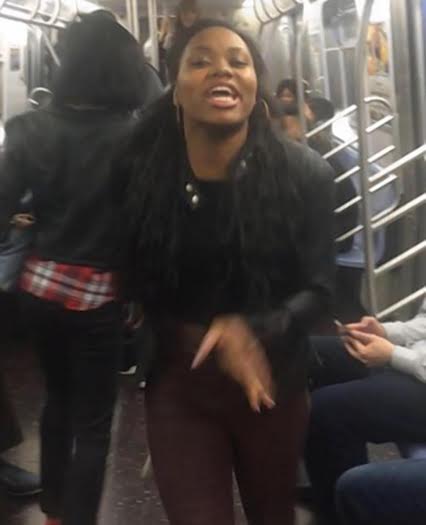 The video “Man smacks the soul out of girl on the NY Subway” shows a young woman with two female friends egging her on while she verbally abused the lanky man, wearing a leather 8 ball jacket and fur hat.
She can be heard insulting his style sense as he nodded and smiled.
Eventually, the man filming the incident caught the girl’s attention. She jumped up from her seat and knocked the phone from his hands twice.
Then the woman continued to verbally abuse the tall man in the hat.
The NYPD said they are looking into the incident on the Washington Square station-bound F train, but didn’t have details.
“You sound stupid,” she yelled at him.
After a brief pause she hit him in the back of the head.
“What you call me?” she said.
The man whipped around and delivered a loud, right-handed slap. It’s fast becoming the slap heard round the Internet