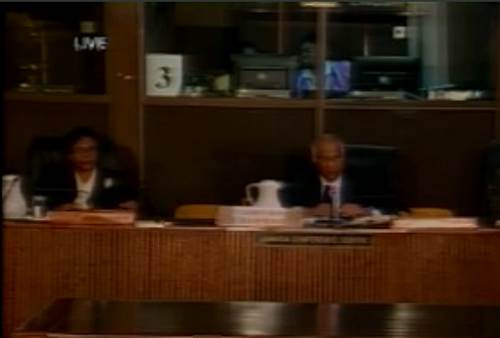 A witness testified in the Tivoli Gardens Enquiry yesterday that a soldier who participated in the May 2010 operation to apprehend Christopher ‘Dudus’ Coke confessed to her that he was the one who shot her, and that he apologised for doing so.
Nicola Bryce-Wilson, the eighth witness to testify in the televised enquiry, identified the soldier as ‘Baby Shrek’ and said that he made the confession two weeks after she was shot at her mother’s home on Monday, May 24, 2010.
Bryce-Wilson testified that she approached the soldier at Darling Street in downtown Kingston and told him that her son said he was the one who shot her.
She said the soldier apologised and said that he was glad she didn’t die.
But Bryce-Wilson was tackled by attorney Peter Champagnie — one of the attorneys representing the Jamaica Defence Force (JDF) — about the fact that she didn’t add the name of the person she said confessed to her in three previous statements until October this year.
But she said she didn’t remember if she had put it in those statements.
At one point attorney Michael Lorne, who is representing the Office of the Public Defender, intervened in the cross-examination, saying that the Bryce-Wilson had testified that she had seen the soldier at various times in the community and that she got to know the names of the soldiers over time.
Resuming his cross-examination, Champagnie suggested to the witness that no soldier admitted to shooting her.
“You never was there, sir,” she responded.
She, however, told Champagnie that she was unable to see who had shot her.
Following Champagnie’s cross-examination, commission chairman Sir David Simmons questioned Bryce-Wilson on the issue of the name and she admitted that her son had told her the name Baby Shrek from as far back as late 2010.
Prior to that, Bryce-Wilson — whose evidence was led by Queen’s Counsel Garth McBean — gave gripping testimony about her ordeal.
Bryce-Wilson was the second person yesterday to give evidence of abuse by soldiers. The first was Maurice Tomlinson, who testified that a gun was put to his head and that he was close to being killed by soldiers after he and his wife were beaten.
In her examination-in-chief, Bryce-Wilson said she was shot in the left breast, left leg and the left arm at her mother’s third-floor apartment and that when she ran downstairs crying for help and shouting “Jesus, Jesus!” a soldier exclaimed: “Hey gal, a kill we ago kill you now!”
“Me a Christian,” she said that she responded before a brother of hers opened a door and she jumped inside. She said soldiers commanded them to open the door or all the occupants of the apartment would be killed.
The witness said she never received medical treatment until the Wednesday, although soldiers had attempted to treat her injuries.
Under cross-examination from Valerie Neita-Robertson, who is representing the Jamaica Constabulary Force, Bryce-Wilson said the solider had told her that they could not take her to the hospital because cross-firing was taking place in the community.
When told by Neita-Robertson that she spoke about threats by the soldier for the first time in an October 2014 statement, Bryce-Wilson said she didn’t “remember everything” when she was giving her earlier statements.
She also said that she and Baby Shrek now “have a very good relationship”.
Tomlinson, meanwhile, testified that he was badly beaten by members of the security forces and threatened with death on May 24, 2010, “for no apparent reason”. He said he was detained that same day and released on May 27, 2010.
Tomlinson said he was taken from his mother’s house and brought to an area in Tivoli Gardens, where he saw bodies, and was told to run. According to the witness, a soldier told colleagues not to kill him there because his mother was in viewing distance. He said that he was leaving that area when another group of soldiers pushed him into a yard and began beating him until he collapsed. There, he said, a gun was put to his head and a soldier gestured to another to kill him. He said that he managed to escape and run from the yard, but was knocked out cold by another soldier.
He said he suffered several injures and provided a medical report by a Dr Lawson to support his story, but the commission chairman pointed out that a release from a detention document he signed states that he had no injuries. The chairman asked him if he was beaten after leaving custody and he said no.
Questioned by Linton Gordon, one the attorneys for the JDF, on this point, Tomlinson said he was told to sign the document stating that he had no injuries or face further detention.