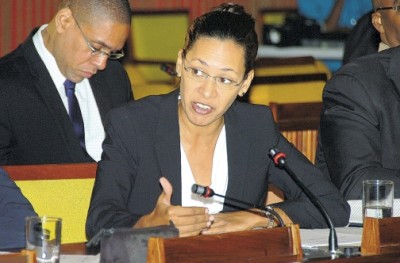 A West Kingston resident, Granville Johnson, testified in the Tivoli Gardens Enquiry this morning that he was deliberately shot by soldiers during the West Kingston incursion to capture fugitive Christopher ‘Dudus’ Coke in 2010.
The 50-odd-year-old man said that he was along Charles Street in downtown Kingston on the 25th of May, when soldiers saw him and opened fire as he was running.
Under cross examination by attorney Deborah Martin, Johnson said that he left Tivoli Gardens after residents started barricading the community.
“Common sense tells you that that when barricade go up, man a go deh behind it a fire shot,” he said.
In his examination-in-chief Johnson said that he received medical attention for the gunshot wound the day after he was injured because shots were still being fired in the community.
He said that since the incident he has been unable to operate his clothes-retail business in the Coronation Market and showed the Commission the scars from the gunshot wound.
At the same time Johnson told the Commission that Coke was doing a good job in the community and that people who protested against his arrest had a right to do so. “They knew what he did for them,” he said.
“While Coke was there no rape and robberies could not occur in the community,” Johnson told the Enquiry underway at the Jamaica Conference Centre in downtown Kingston.