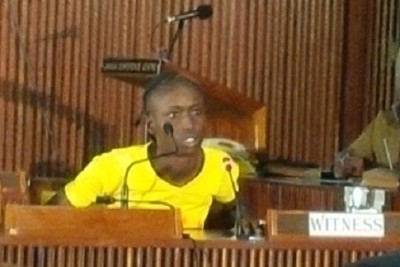 The third witness in the Tivoli Gardens Enquiry 18-year-old Keshona Gordon testified today that she saw soldiers shoot her step-father during the May 2010 operation to arrest Christopher ‘Dudus’ Coke.
Gordon a resident of McKenzie Drive in Tivoli Gardens also told the Enquiry that she was shot by soldiers while returning from taking her step-father to the hospital.
Gordon, who was 14 at the time, said that with the help of friends she placed her injured step-father in a hand-cart and she pushed him the Kingston Public Hospital (KPH) some distance away along North Street. She said that shots were still being fired at the time and no one wanted to assist, so she pushed the cart to the hospital alone.
According to Gordon nurses at the hospital refused to allow her inside so decided to return home.
She said that when she reached Spanish Town Road on her way home she heard heavy gunfire and got down on the ground. While on the ground she said that she felt “different” and saw her skin starting to swell.
Gordon added the people around were telling her to run but she couldn’t as she “felt blank”. She later realised that she was shot in the leg. She too was taken to the KPH for treatment.