It took a few days but base on what I’ve gather thus far there wasn’t any shootout.The young man Tevin was allegedly killed by the cops after being awoken in his room.Met I’ve attached videos and pics outlining aspects of what happened that fateful day. 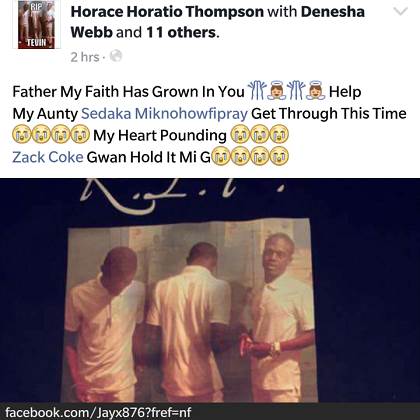 Firstly the Deceased is well connected as is Father is a top ranking man in England and Tivoli.The police are alleging he was a member of the young generation gang as he is said to be related to the Cokes.‎ The police were chasing several young men who fled throughout several apartments,at that time no shots were fired. One of the youth ran in the direction of Tevin’s apt so the police entered then mayhem ensued.Residents reported being chased away prior to the cops going in the house,several shots were fired and after a lil while it became apparent Tevin was killed. 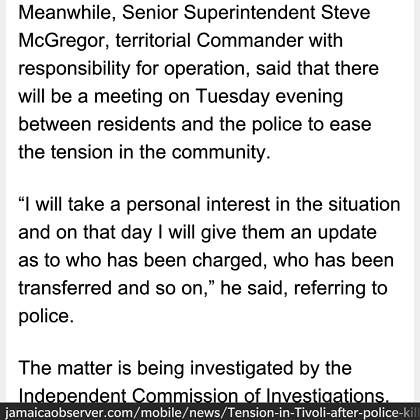 Secondly tempers began to flare when ppl found out it was the working youth Tevin who was killed.Several pictures and videos outline the mood and reaction to take it to the cops.These audio-visual expressions depicts violent thoughts,views and actions i‎ncluding a young teen with a Carbine MILITARY grade Rifle and the mobolization of men to go get guns to kill them p***y deh(cops presumely).Thirdly there is a widely shared view that something went wrong with this police operation and Indecom has been call in to investigate.Met there is one key factor that signals this is clearly evident and I’ve attached the quote from Senior Superintendent McGregor as proof.

Even before any proper investigations have been done this Snr top cop is alreay signalling culpability on the part of the cops by reassuring the ppl he will by informing them WHO(cops) will be charged an‎d who will be (Cops) transferred!!Met this is unheard of in JCF’s history even when cops are guilty the public is never typically told that ,just that the matter is and will be investigated. This also corroborates the report that even the cops by their own admission were allegedly saying the wrong person was killed in a case of mistaken identity! 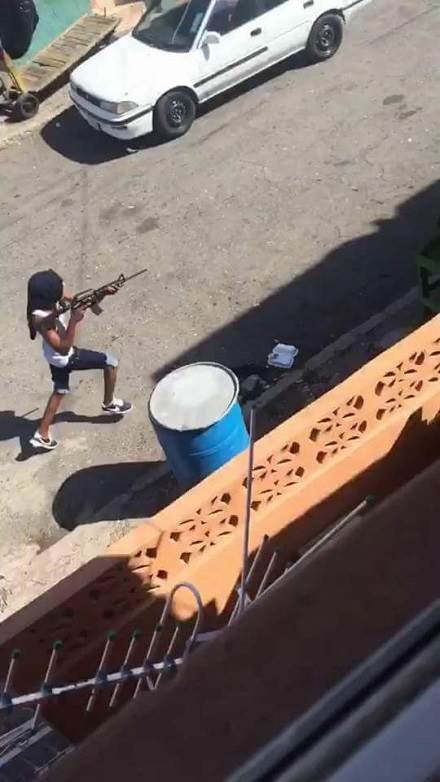 When one analyzes the phenomenum of the reality of Jamaica’s Tivoli situation it reflects a snapchat of what is wrong/right in Jamaica depending on Who and what Lens it is being looked through!Tivoli was a noble well intentioned socio-economic experiment that somehow has been botched and hijacked by politicians and criminal elements.An entire set of ppl has been DEMONIZED and held hostage by the actions of a few.Did you know there are many civil servants(cops,soldiers,teachers,doctors,lawyers etc..) hailing from and some living in Tivoli?Do you know Tivoli is the epi-centre of Jamaica’s pre-eminent strides and success stories in Culture i.e music, their dance troupe,sports,Marching bands…there is sooo much positivity there!The media and political hacks constantly ignore or downplay the good and ramp up anything that puts Tivoli in a bad light.

Comparatively let’s analyze the negativity which indeed does exist as in other places but what sets TG apart is to the extent that Badmanism is indoctrinated in the mindsets of the Residents.Tivoli ppl has a penchant to proving they the baddest so that even simpletons use the saying a “Tivoli mi come from”‎ to chuck badness.How can I forget being on the bus and when it reach the vicinity of Tivoli,men,women n children would constantly disembark without paying and the conductors Dare not ask for fare smh!They have this victim complex as in everybody is out to get them and their responce is to bond in violence to Defend against and attack others they percieve as giving them a fight!
Another example was a child clearly ran in front of a jutc bus and got hit Down in the vicinity of Tivoli and Met the driver had to run leave the bus and barely make it to the denham town station alive.They burnt the bus and jutc wanted to fire the driver for not securing their property but can u imagine if Tivoli ppl did ketch him? Can you imagine an entire community dependent on and thriving off the proceeds of crime?

In closing we must seek to balance the thing and put our prejudices aside re Tivoli.It was allegedly reported that during an interview in tears Hon Eddie Seaga declared the ppl have a right to defend their lives regardless if it meant using an illegal weapon.Think abt such a profound statement,whether it is the cops or badman or whoever…smaddie come fi kill u off,anything u can draw for, wouldn’t u use it to defend you and yours? 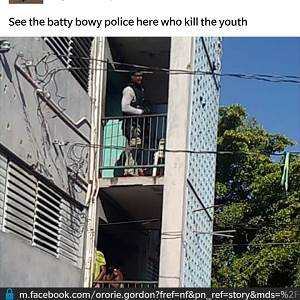 To the Cops….STOP KILLING OFF GHETTO YOUTH
To Tivoli ppl….STOP being fearful,RISE UP against the few bad eggs tarnishing your community and holding your FREEDOM at ransom‎.
To the general public…STOP condemning the Ghetto to HELL.Many of Jamaica’s well reknowned ppl who put us on the map came from humble beginnings so a nuh rich ppl do that.