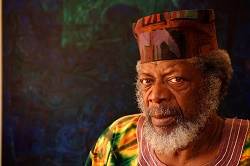 Artist LeRoy Clarke
Homosexuality is not only threatening the arts but is used to indoctrinate gang members, says artist LeRoy Clarke. The T&T Guardian asked Clarke to elaborate on the comment he made last week at his book launch which shocked and outraged some of his fellow artists, members of the gay community and others. In a phone interview yesterday, Clarke related homosexuality to the increase in crime, saying young men are usually indoctrinated into gangs with homosexuality and because of the violation of their manhood use the gun as a symbol of their masculinity.

He added: “It is brought about by power bases that manipulate the principles that hold our heritage for their own advantage. “Something is happening with the gender paradigm today. We had guidelines where we looked at certain types of conduct as abominations. We took it from the scriptures.” The Bible, he added, was one of those and verses clearly refer to homosexuality, men with men and women with women, as “unnatural” and an abomination. “Today, the word abomination does not have the same tone. People indulge abominations, accede to them,” Clarke lamented. “At 73, I can say the world is no longer mine,” he said.

Asked exactly what he meant by saying homosexuality was threatening the arts, Clarke said with the exception of the sailor and maybe the midnight robber, there were no longer any definitely male costumes in Carnival, not even in portrayals of the devil. “An effeminating power has taken over the costumes and even the rhythm of the music. Carnival is no longer male and female.
“This is a very serious matter. We are dealing with a problem that is threatening our heritage. Fifty, 60 years ago what is happening now was not prevalent. I grew up in Gonzales.
“The conversion is threatening identity. It had made it into a ‘oneish’ kind of place,” he added. Clarke said he had been hearing rumours about the reactions to his comment, expected to be misunderstood and did not expect the comment to be popular. “But,” he said, “I don’t feel threatened. I believe in God.”

Asked which god he believed in, since he was an Orisha elder, Clarke replied: “I started off as Anglican. I am an Orisha elder now. “But I have gone even beyond that. I do believe in a God I don’t know. All I know is I have God-yearning and it is to that I yield.” Clarke said he was not waging war on anybody but was speaking about something that made people uncomfortable but others were afraid to talk about it. He said homosexuality was threatening not only the arts but the dream of becoming a society. There was a need to have discussions like these without animosity, he said. “Why is it we are afraid to speak? I come out (sic) and suddenly I am a bad fella. “Somebody needs to point out that something is definitely off-balance,” he added.

‘Retrograde thinking’
Writer Monique Roffey said she had been deeply affected by Clarke’s comment. She said: “It is not what I would call progressive. It shows a lack of connection with modern thinking. if you consider the UK where gays were granted rights to marry. “It shows lack of awareness, compassion, humanity. This is such a big error of judgment. “It is very surprising because it is a very intolerant thing to say about gay people, about a so-called minority who fought long and hard for equal rights. This feels really retrograde.” The Bible, she pointed out, is 3,000 years old.
On her own sexuality, Roffey said: “I am not lesbian. I am queer.” Her erotic life is described in the award-winning Trinidad-born British writer’s memoir, With the Kisses of his Mouth.
In it she tells of a sexual odyssey she embarked upon after a dramatic breakup, which led her “into the worlds of casual-sex dating sites, western neo-tantra, Native American neo-shamanic sacred sex practices… the famous swingers’ resort of Cap D’Agde, and to a cave in the south of France where Mary Magdalene is said to have escaped and prayed for 30 years after the death of Christ. “Some light BDSM (bondage, discipline, dominance, submission, sadism), some sex magick, some five-rhythms dancing and a couple of Bronze Age Stone circles also feature.”
Roffey said, as reflected in her memoir, she struggled to find a place for herself in the world outside the mainstream, challenging the heterosexual norm. “If you are different to mainstream, you face constant criticism. This is the kind of comment associated with the conservative mainstream. There is no space on the planet for that kind of thinking,” she added.

‘Discrimination is colonial’
If Clarke was speaking on behalf of artists, he was not speaking for artist/writer Christopher Cozier, who has been internationally recognised with a 2014 Prince Claus Fund Award. “It is deeply ironic that he has built his career on conversations about recognising the value of people of African descent and discriminatory colonial laws. “Laws discriminating against gays are also colonial,” Cozier said. Nazi Germany under Hitler discriminated against Jews, the physically challenged and gays, he said. And so did the apartheid system in South Africa under white rule.
Cozier said he was not gay but knew a lot of gay people and young people reading Clarke’s comments may wonder what were their prospects in a place like T&T. “It’s sad when he and people like Pastor Cuffie say the same thing,” he said. Told the Bible denounced homosexuality, Cozier replied: “I am not into that kind of thing.”

‘Attention-seeking babblings’
Founder/director of the Bocas Lit Fest Marina Salandy-Brown said: “What nonsense. The ruination of the arts here is the lack of a proper arts policy for the country that has been articulated and communicated to the people, the lack of planning, infrastructure and public education. “The poverty of the arts discourse is at the heart of the problem and these attention-seeking babblings from someone who should know better are just proof of that.” Carnival bandleader and designer Brian MacFarlane said: “It is unfortunate that Mr Clarke has chosen to make this comment. I have always had great respect for him and his work. “People from all walks of life, be it colour, creed, race or sexual orientation, have contributed to the development of culture in all its forms in T&T and continue to do so.” Actor and 3Canal member Wendell Manwarren said he had no comment to make on anything Leroy Clarke said.