Stay out! – 13 Jamaicans turned away from Trinidad 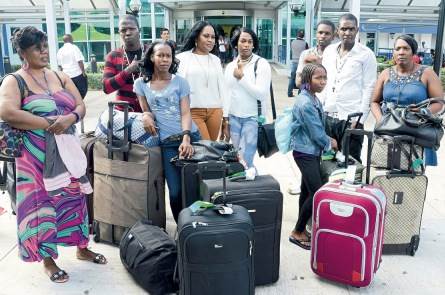 IN a direct breach of the Revised Treaty of Chaguaramas, and a snub of a recent ruling by the Caribbean Court of Justice (CCJ), Trinidadian immigration officers denied 13 Jamaicans entry into that country on Tuesday night, detained them and sent them back home on the first flight yesterday morning.

The Jamaicans were angry when the Jamaica Observer spoke to them immediately after they were processed by immigration officials at the Norman Manley International Airport in Kingston yesterday afternoon.
They said that their passports were confiscated by the Trinidadians and they were ordered to sit on a wooden bench throughout the night before they were rudely bundled on a Caribbean Airlines flight on which the majority of the Reggae Boyz football team were being flown home after their friendly match at the Hasely Crawford Stadium.

Among those turned away from her fellow Caribbean Community (Caricom) state was Anne Gordon, who was given the task of chaperoning an 11-year-old girl to see her father who resides in that country with his Trinidadian wife. However, both Gordon and the girl were denied entry, despite carrying Caricom passports.

“She cried all night. They just took our passports and told us we did not meet their entry requirements. If her father lives there why did they refuse the child the chance to see her father?” Gordon questioned.

The child was picture of dejection. “I don’t see my father since last year,” she said.

In a recent ruling in the landmark case involving Shanique Myrie against the Barbadian Government, the CCJ ruled that where a Caricom national is refused entry into a member state, that national should be given the opportunity to consult an attorney or a consular official of his or her country, or to contact a family member.

The Jamaicans said that they were not allowed to contact anybody nor were they even allowed to use their cellular phones to contact the persons who were waiting outside the Piarco Airport to receive them. They also claimed they were threatened that their phones would be seized if they attempted to use them.

“When I gave them the number of my sister-in-law, the woman (immigration officer) pretended to make a call and then told me that it was a man on the other end. While she did that I called my sister-in-law, who had invited me to visit her, and got her. I tried to give the immigration officer the phone but she said she was not talking to anyone,” Onicia Robinson, one of the Jamaicans denied entry to Trinidad, said.

When the Observer contacted Robinson’s sister-in-law, Gillian Leben, she confirmed that she was not contacted by any immigration official in regards to her receiving Robinson. “I was outside the airport with a taxi to pick her up until 4:00 this morning (yesterday) and my phone did not ring. No one contacted me,” Leben said.

The CCJ had also ruled that member states should give, promptly and in writing, reasons for refusing entry to Caricom nationals. The receiving state is also obliged to inform the refused national of his or her right to challenge the decision.

The Jamaicans claimed that this was not done, saying that they were threatened to sign a refusal of entry form or spend the night in jail.

“I did not sign any form and I saw when the woman sign the form for me,” said Cassandara Douse, who was among the 13.

For Omar Campbell the denial of entry was particularly painful. Campbell showed stamps in his passport to show that he had spent 10 months in that country and to compound matters he is married to a Trinidadian woman. He showed his marriage certificate to prove his claim. “To make matters worse, yesterday was my wife’s birthday,” Campbell said with a sad look on his face.

The Jamaicans also complained that they were verbally abused and told they were being turned back because of the recent murder of Trinidadian national Keron Fraser, whose body was found in a shallow grave at Duncan’s Pen in Spanish Town, St Catherine, recently.

Fraser disappeared on October 18, two days after he arrived in the island from Trinidad.

Police said that, upon arriving in the island on October 16, Fraser, who was with a female companion, rented a motor vehicle and headed towards an undisclosed location in Clarendon. He was reported missing two days later.

According to the police, a few days after Fraser’s disappearance, two men were detained by the police after they were intercepted in the motor car which he had rented. The vehicle had bloodstains, the police said.

In addition, the Jamaicans said they were only given two minutes to use the bathroom when they requested to do so, and security officials followed them to the bathroom.

“They sat and watched us all night and said we are prisoners. Dem don’t like Jamaicans and say dem turn us back because we kill Trini in our country,” said June Henry, who was visiting the twin-island republic for a three-week vacation.

The Jamaicans also complained that they were extremely uncomfortable sitting up all night after more than eight hours of travel.

“I had to sleep on a carpet, and we got some raw tasting chicken about 3:00 am,” Jodian Davidson said.

For years, Jamaicans have complained that they have been subjected to sub-standard treatment at the hands of Trinidadian airport officials and have advocated a boycott of goods from that country as retaliation for the xenophobic behaviour of the Eastern Caribbean nationals.

Jamaica is a major market for Trinidadian goods and a number of Trinidadians have worked and lived in the country without hassle and in accordance with free movement within Caricom.

A passenger who travelled on the same flight with the denied Jamaicans told the Observer that an airline official informed him that last week 26 Jamaicans were turned back from Trinidad.

There was, however, no confirmation.

A security guard at the Norman Manley International Airport said that he had overheard a number of Jamaicans returning from Trinidad complaining of bad treatment at the hands of Trinidadian officials.

Yesterday, Jamaica’s Ministry of Foreign Affairs and Foreign Trade raised concerns about the number of Jamaicans who have been denied entry to the twin islands in recent times.

“The ministry is concerned at this development and continues to interface with the relevant authorities in Trinidad and Tobago on the matter, including in the light of the Shanique Myrie ruling by the Caribbean Court of Justice,” it said in a release.

Airline tickets to Trinidad and Tobago cost between US$520 and US$750 depending on when the ticket is purchased.