Ryan Lochte and three other U.S. swimmers were held up at gunpoint early Sunday morning.

Reached by USA TODAY Sports on Sunday morning, his mother Ileana Lochte said that her son was robbed but is unharmed.

“I think they’re all shaken up. There were a few of them,” Ileana Lochte said. “No, they were just, they just took their wallets and basically that was it.” 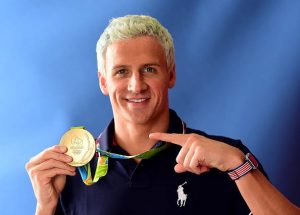 “According to four members of the U.S. Olympic Swimming Team (Gunnar Bentz, Jack Conger, Jimmy Feigen and Ryan Lochte), they left France House early Sunday morning in a taxi headed for the Olympic Village,” Sandusky said in a statement released Sunday afternoon. “Their taxi was stopped by individuals posing as armed police officers who demanded the athletes’ money and other personal belongings. All four athletes are safe and cooperating with authorities.”