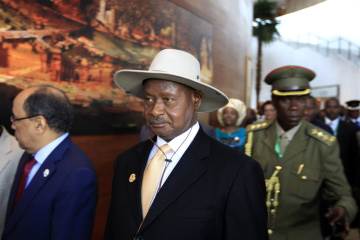 The President of Uganda on Monday signed a bill bringing into law harsh measures against gay and lesbian people, the BBC reports.

Homosexuality is already prohibited by law in Uganda, but the new law signed by President Yoweri Museveni goes further by criminalizing positive talk of homosexuality, and failing to report gay people to authorities. Lesbians are included in the new prohibitions for the first time.

The use of capital punishment for homosexual acts was originally put forward but withdrawn after a global outcry; yet the new laws still threaten those convicted for the first time with a 14-year prison sentence along with life sentences for any acts of “aggravated homosexuality.”

Yoweri Museveni stated openly a week ago that he would approve the legislation despite warnings from U.S. President Barack Obama that it would “complicate” America’s relationship with Uganda.

Museveni initially put the legislation on hold claiming he was waiting for advice from American scientists about whether homosexual tendencies are rooted in ‘nature’ or ‘nurture.’ However a Ugandan government spokesman claimed that he signed the legislation so as to declare “Uganda’s independence in the face of Western pressure.”

Archbishop Desmond Tutu was among those who condemned the legislation, claiming that there was “no scientific justification for prejudice and discrimination.”