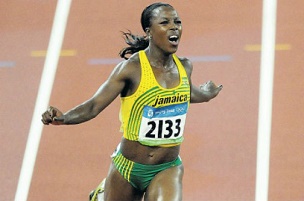 MONTEGO BAY, Jamaica — Veronica Campbell Brown says the last few months of her life has “brought much pain and suffering” as she awaited a resolution of her drug case that started in May last year when she returned a positive test for a banned substance at the Jamaica International Invitational.

But her “faith” and integrity never wavered as she went through the process, a release sent out by Campbell Brown’s manager Claude Bryan said Monday morning.

Campbell Brown was cleared by the Court of Arbitration in Sports (CAS) days ago, OBSERVER ONLINE learned, after what was reported to be a two-year ban by the IAAF and is now free to resume her career.

Below is the full text of the release:

The past several months of my life has brought me much pain and suffering, however, my faith, family, friends and fans have stood by me as a source of encouragement and a reminder that God’s word is true in that he will never leave us nor forsake us.

The final court available to us as athletes have spoken and humbly I say they have confirmed my innocence. I harbour too much self-respect and a similar respect for the purity of competition to resort to illegal means to success. This same self-respect will now enable me to leave behind the insensitive and ill-informed media remarks and look towards returning to the track to give of my best to God’s glory.

Yes, I lost out on the opportunity to compete for most of 2013 and the chance to defend my World 200m title, however, I press on. Dr Martin Luther King Jr spoke of the redemptive quality of unearned suffering and I must say I am redeemed.

I wish to specially mention my dear husband and coach Omar, my parents, Omar’s grandparents and my siblings for standing by me when I needed their strength. Thanks of course to my legal team of Mr. H. Jacobs, Honorable P J Patterson QC, Ms N. Foga and Mr. M. Morgan. Their varying degree of expertise was invaluable to me during the journey to clear my name. To my management team led by Mr. C Bryan and Mrs J Bryan your unwavering support was important as well. I would also like to thanks my prayer team of Pastor Maison and his wife, Mr. and Mrs. A. Watson, Minister Earl and my aunt Sharon and all the churches that has being praying for me. To my main sponsor Adidas I also say thanks.

I would be remiss in not thanking the IAAF for expeditiously handing my case to the CAS. My legal and management team will be available to address the media in greater details as I now focus on moving forward with my career and philanthropic efforts.

0 thoughts on “VCB CLEARED AND GRATEFUL”