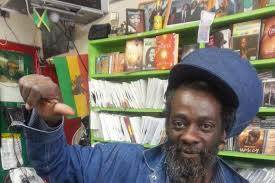 UK NEWS: BRIXTON SPLASH CO-FOUNDER AND RECORD STORE OWNER BLACKER DREAD JAILED FOR MONEY-LAUNDERING
By Janice aka Miss Mad News on June 23, 2014 • ( 2 Comments )
Brixton Splash co-founder/board member, Reggae producer and music store owner, Blacker Dread has been jailed alongside five other people (including a former credit controller) for stealing £700,000 from Sutton based company ICMD Ltd.
Blacker Dread, whose real name is Steve Burnett-Martin was jailed for two and a half years for receiving £230,411 in fraudulent payments as part of the £700,000 scam.
Blacker Dread the legendary music store in Brixton’s Coldharbour Lane is one of the UK’s key distribution outlets for reggae music on vinyl, tapes and CD’s.
Via Croydon Advertiser
A FORMER credit controller has been jailed for her key part in stealing more than £700,000 from her employer.
Lorna Martin, of Selhurst Road, South Norwood, has been jailed alongside the five people into whose bank accounts the money was paid.
The 32-year-old used her job at marketing company IMCD Ltd in Sutton to create fake invoices to pay the money from the company into her and others’ bank accounts.
From September 2011 to August 2012, £30,548 was paid into two Santander bank accounts in Martin’s name, and £94,449 to her partner at the time, Leon Binns, 31, of Southbridge Place, Croydon.
A further £230,411 was paid to record store Blacker Dread, based in Brixton and run by Steve Burnett-Martin, 55, of Gipsy Hill.
Continue Reading….
According to The Brixton Blog, Blacker Dread’s now closed music store has a sign up that reads “Oooooops”.
This news has shocked me. For years Blacker Dread has been viewed as a well respected figure in the community, especially in Brixton.
And to think only last month a crowd funding page was launched to raise funds for this year’s Brixton Splash event, due to significant funding cuts as well as rising costs. Organisers have had to resort to launching a funding page to ensure the event goes ahead this year while Blacker had thousands of pounds languishing in a bank account.
Anyway look where greed gets you. A reputation ruined and a two and a half year stint in prison.

0 thoughts on “UK BASED REGGAE PRODUCER ON MONEY LAUDERING CHARGES”