US MARINES HAVE ALREADY ARRESTED SOME BOKO HARAM MEMBERS IN NIGERIA 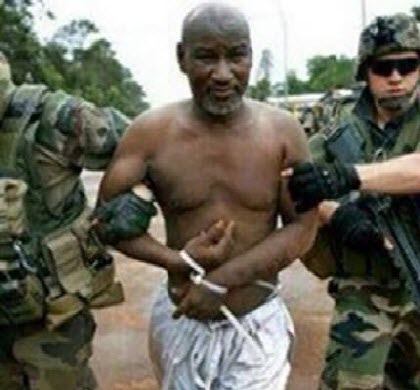 US Marines currently in Nigeria to help the government combat Boko Haram terrorists have made their first arrests taking two male suspects into custody after they were found in possession of arms and ammunition during a targeted search.

Over the last week, US Marines have arrived in Nigeria to help with the fight against terrorism after Boko Haram took their war of terror to another level by abducting 234 pupils from Government Girls Secondary School Chibok in Borno State. Acknowledging that the matter was getting beyond its control, the Nigerian government swallowed its pride and accepted outside help.

With the abduction coming at a time when Nigeria is hosting World Economic Forum on Africa and inbetween two horrific bomb blasts in Abuja, there has been a lot of international offer of support. France, the UK, the US and China have all offered differing degrees of support in the form of intelligence, training and military assistance.

Since Wednesday, US troops have arrived in Nigeria where they are providing security for the WEF summit on Africa. It is expected that the Marines will also join Nigerian soldiers in pursuing Boko Haram into the Sambisa Forest in Borno State where they are believed to have spirited the kidnapped girls to.

According to Major General Chris Olukolade, Nigeria’s director of defence in­formation, two suspected Boko Haram members were arrested at Any­ibe in Logo Local Gov­ernment Area of Benue State. He added that the duo, made up of a teenager and an elderly man, were arrested during a cordon-and-search operation and found to be in possession of firearms.

Weapons found in their possession included two rifles, three locally fabricated pistols and 61 rounds of special ammunition. Apparently, the arms were found in the possession of the teenager he is currently undergoing interrogation in custody.

US marines are highly specialised soldiers who have been deployed effectively in areas affected by serious conflict and terrorism such as Afghanistan and Iraq. It is not yet clear how many Marines will be deployed to Nigeria as part of the current operation or if they will establish a base in Borno State.