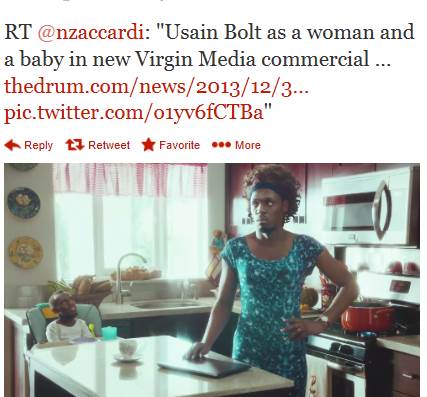 Created by BBH, the new ad shows the whole Bolt clan simultaneously using Virgin Media’s superfast broadband service to perform their favourite tasks. The Jamaican sprinter takes on a range of roles including a cheeky baby Bolt and a mischievous Mrs Bolt whose favourite athlete is Mo Farah.

Richard Larcombe, brand and marketing director at Virgin Media, said: “The growth of in-home devices is increasing exponentially, as such, customers rely on their network more and more to deliver a seamless experience.

“Usain brings the ads to life with his brilliant portrayal of an unforgettable Virgin Media family.”

Media planning has been handled by Fifty6 and the ad will run for the first time during Harry Potter and the Deathly Hallows Part 2 on ITV London on 1 January.

The advertising push comes as Virgin Media prepares to introduce a 152mb broadband service next year, which it claims will be “twice as fast” as any of its rivals.