VICTORY FOR THE CUBAN REVOLUTION 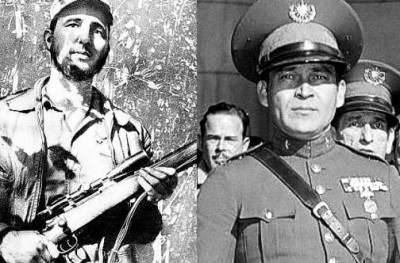 TODAY is the 56th anniversary of the overthrow of the Fulgencio Batista regime in Cuba by Fidel Castro and his militant supporters on January 1, 1959. It signalled the end of the tyrannical Batista dictatorship. It also signalled the end of the days of exploitation that Cuba was subjected to from the United States for several decades.
Fidel Castro made it abundantly clear that he was implementing a socialist order in Cuba. He did not start out as a communist, but was forced to go that route following the fallout with the USA when they refused to trade with Cuba. Fidel Castro then turned to the Soviet Union for help, which they gave, but with several conditions. The main condition was that Cuba should go communist.
However, American journalists who interviewed Castro in the 1960s reported that what obtained in Cuba was not communism in the classical sense, but Castro-type socialism, later known as the Cuban model. And many who travelled to Cuba and the Soviet Union also said that there were distinct differences between the two countries. Even before that, in the early 1960s, local journalist Evon Blake had a story in his monthly Newday magazine entitled ‘Castro: dictator but not communist’.
By the 1970s, the United Nations statistics revealed that Cuba had progressed way above the average Third-World country in terms of agricultural output, health care and education. The anti-communists countered that it was only possible because the equivalent of a million US dollars was being pumped into Cuba on a daily basis from the Soviet Union. It never occurred to any of these anti-communists that, by even saying that, they were revealing the progress of communism in the Soviet Union as they showed that the communist superpower was able to do that.
There was much local opposition to Jamaica’s then prime minister, Michael Manley, expanding diplomatic relations with Cuba. But the anti-socialist rhetoric only helped the Manley cause and the Manley rhetoric. It could have helped the return of the People’s National Party to government in 1976.
The Cuban Government gave Jamaica four schools, the first of which was the Jose Marti School at Twickenham Park in St Catherine. Then there were the Cuban doctors — who left when the Jamaica Labour Party Government led by Edward Seaga broke diplomatic relations with Cuba on October 29 1981. All sorts of allegations had been made against Paul Burke being in league with wanted men who had reportedly fled to Cuba, none of which were ever proven. Yet that was the basis on which ties were cut with Cuba.
I represented St Michael’s Roman Catholic Seminary (now renamed theological college) at an ecumenical consultation on evangelism in Trinidad in 1975, which was held on the St Augustine campus of the University of the West Indies. At that conference, at least one Cuban Protestant minister complained that only Roman Catholics counted in the eyes of Fidel Castro.
Socialism and Catholicism
But some will ask how do I reconcile my socialist position with the teachings of the Roman Catholic Church. In the writings of the popes going back to the earliest days of communism, the church taught that no one could be a good Catholic and a good socialist at the same time. This was when the words communism and socialism were used interchangeably. There was not yet a distinction made between Scientific Socialism or communism and the several other forms of socialism. In any event, the other forms of socialism had not yet fully developed to have a separate classification.
Four decades ago, the Roman Catholic Church explained that the meaning of the word socialism had evolved to include even the social teachings of the Roman Catholic Church. But in fairness to Norman Washington Manley — who was never Roman Catholic — he understood the distinction between the two words long before many others.
When Norman Manley was criticised in Catholic Opinion for expounding socialism, he countered by saying that he could not understand he criticism since everything he ever said was in line with the social teachings of the Roman Catholic Church. This at least showed that Norman Manley was reading the teachings of the Roman Catholic Church.
Jamaican-born Mon-signor Gladstone Wilson, a Roman Catholic priest who was arguably the seventh most learned man in the world, was part of the so-called Drumblair circle of intellectuals that met regularly at Norman Manley’s home. Monsignor Wilson, who knew 14 languages and had four doctorates, might have been the one to introduce Norman Manley to Roman Catholic social teaching.
The anti-communism rhetoric cost the PNP three elections, that of 1944, 1962 and 1980. In 1944, the rhetoric spoke to what obtained in Russia. In 1962, it was the Russian ship in the harbour. In 1980, it was all about Michael Manley and Castro.
Indeed, it was a strange irony when Bruce Golding, as prime minister, visited Cuba. It was a further irony that when Barack Obama announced that the embargo against Cuba would be lifted the Opposition Jamaica Labour Party welcomed the decision. I invite readers to do their research on the position of the JLP on Cuba as late as the 1980s.
Pope John Paul II visited Cuba in the 1990s. One of the statements made by Fidel Castro was that he and the pope were ideological twins. Pope John Paul II called for a lifting of the embargo against Cuba. In recent times, Pope Francis has also called for this and worked tirelessly behind the scenes to bring this about.
Classical communism in the Soviet Union came to a final end on December 25, 1992. There was no longer a Soviet Union but Russia and 14 other states with their own independent governments. Cuba was left isolated but did not surrender to anyone — least of all the powerful and mighty USA, whether under Fidel Castro or his brother Raul. Yet the USA has lifted the embargo. The former Soviet Union lost the cold war against the USA but Cuba has won theirs.
Happy New Year to everyone!
ekrubm765@yahoo.com

0 thoughts on “VICTORY FOR THE CUBAN REVOLUTION”