The publisher, editor-in-chief and news editor at the National Publishing Company Ltd in Barbados appeared in court yesterday, charged with conspiring to expose underage children.

CEO and Publisher Vivian-Anne Gittens, Editor-in-Chief Roy R. Morris, and News Editor Sanka Price were questioned by police at a Bridgetown police station and taken before the court in connection with the publication of a story and photo of two secondary-school children having sex.

Price is the author of the story. Attorneys Queen’s Counsel Alair Shepherd and Ezra Alleyne are representing the Nation officials.

On Wednesday, two teenage boys, who were allegedly responsible for capturing the act, appeared in court on a charge of taking an indecent photograph sometime between September 1 and October 31. The boys were released on BDS$10,000 bail and placed on a 7:30 p.m. to 6 a.m. curfew. 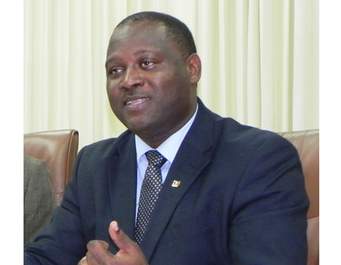 A BARBADOS government minister has launched a scathing attack on a Sunday Gleaner editorial, telling the newspaper to take its nose out of Bajan affairs and concentrate on the “rot going on in Jamaica”.

The fiery reaction stemmed from the editorial, published this past Sunday, on the controversial arrest and charge of three employees of The Nation newspaper in Barbados for publishing a story and photograph of two 14-year-olds having sex at school.

Said Inniss, it is “one of the nastiest pieces of editorial work which I have seen in any media house in the Caribbean”.

In relation to the arrest and charge of the journalists, the editorial stated: “We hope there are no political undertones to this matter, and that it does not imply an attempt to rein in The Nation’s feisty independence.”

The editorial added: “That would be sad and a reversal of that country’s historic tolerance of, and government respect for, free and independent media.”

However, in response to The Gleaner, Inniss said: “So I say to the editor of the Jamaica Gleaner, mind your own business and look at the rot going on in Jamaica. Barbados is in good hands.

“If we cannot protect our babies and grannies, then we are not worth our existence. That is my position.”

He charged that the Jamaican newspaper “sought to give the impression that there was something political; some political mischief involved in the Royal Barbados Police Force bringing charges against senior staff at the Nation newspaper over a recent publication”.

The Barbados government minister stated that the director of public prosecutions in his country was not under any political dictates from anyone.

He said Barbados has a “very independent judiciary” and “under the DLP [administration], members of the DLP have been prosecuted and persecuted”.

He added: “I cry shame when I can see an editorial in one of the leading newspapers in the region [seeking] to give the impression, in defence of their colleagues here in Barbados, that there may be something political about it and the government of Barbados is seeking to stifle and muzzle freedom of speech in this country.”

The trio were also ordered by Magistrate Wayne Clarke to surrender their passports and appear in the Criminal Court No.2 on March 11, 2014.

The charges stemmed from the October 26 publication of an article and accompanying photograph based on the Facebook posting of a video captured on cell phone of two students having sex in a classroom.

DI GLEANER CLASS HIM LIKE DI DIRTY RAG HIM IS

We are privileged that someone of such importance as Barbados’ minister of industry and international business, Donville Inniss, who, in current circumstances, we would expect to be extremely busy, would take the time to note, much more respond to, the comments of this newspaper.

As it is, Mr Inniss has advised The Gleaner to mind its own business and to pay attention to “the rot in Jamaica”, which, like Barbados, is a member of the Caribbean Community (CARICOM) and a partner in regional affairs.

Unhappily, we offended the goodly Mr Inniss with our observations on Sunday about the arrest of three journalists at Barbados’ Nation newspaper – publisher Vivian-Anne Gittens; Roy Morris, the editor-in-chief; and Sanka Price, the news editor – for publishing a photograph of two minors having sex at school.

It is unfortunate that Mr Inniss ignored the fundamental issues raised by this newspaper and limited his response to what many would interpret as an ad hominem attack on Jamaica.

The essentials of our argument remain the same: this newspaper is not in favour of the gratuitous publication of pornography by general-interest, family-oriented newspapers, and we are against the exploitation of children in any form. We know that these are principles to which The Nation subscribes.

We believe that 14-year-olds having sex in schools and a newspaper’s attempt to have the authorities focus on issues of values and attitudes are matters of public interest. The Nation, by its publication of a blurred photograph in which the children could not be identified, did nothing that, in our view, was exploitative or prurient and could be considered to have scandalised public morals.

We continue to believe that Barbados has been a leader in the English-speaking Caribbean in liberalising its laws relating to defamation, lessening, it appeared then, the threat to journalists going about their jobs of informing the public.

In that context, we are surprised that criminal action could be brought against journalists in this fashion, albeit not via the Defamation Act. We fear that the potential of five-year jail terms, which could be the fate of The Nation’s trio, could have a chilling effect on the press in Barbados.

We repeat our hope that this prosecution does not represent a misguided attempt at restraining the independence of The Nation which would be a reversal of Barbados’ long-held commitment to a free press. We look forward to an assurance from Prime Minister Freundel Stuart that this is not the case.

Further, we expect to hear from PM Stuart that fulminations by any of his ministers about any partner Caribbean country are not the policy of his government and are not an indication of Barbados’ rejection of economic partnership with, or investment from, enterprises of any specific CARICOM member state.

Additionally, there are many problems in Jamaica which we wish we had avoided and which we hope our Eastern Caribbean partner has escaped and on which the authorities in Bridgetown would be advised to pay close attention to before they become worse.

Among these are declining values and attitudes and moral decline among the youth. Mr Inniss, given his portfolio, might be interested in issues such as management of the public debt and policies that encourage investment and economic growth.