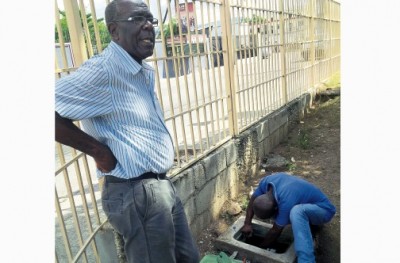 THE National Water Commission (NWC) yesterday carried out its threat and disconnected the water supply of Kingston garage operator Kenneth Myles over an outstanding water bill of $121,000.
“This is the biggest miscarriage of justice I’ve seen,” Myles told the Jamaica Observer after his water supply was disconnected.
“I’m not against paying the water bill but all I’m saying is something is wrong. It’s 25 years I’ve been here and I’ve been paying my water bill,” said Myles, who operates his garage on Lyndhurst Road in Kingston.
Myles’ troubles with the water company began in May this year after the NWC changed his meter to the digital system. Before the switch, Myles’ monthly bills averaged $9,000. His June bill, the first since the switch in meters, was cause for concern, as it came up to $21,000.
Myles said that at the time he received that bill the Corporate Area had been experiencing extensive water lock-offs.
In July, his bill was $20,000 and Myles said he protested the bill and NWC asked him to pay half of the $40,000, which he owed for June and July, with the understanding that they would check the meter.
He said he paid the bill but the meter was never checked as the NWC representative, who was supposed to have carried out the checks, was said to be ill with chikungunya.
He said NWC first disconnected his water supply in October and that he paid the $11,000 reconnection fee and supply was restored.
Myles said he subsequently got a chance to speak with a manager at a branch of the NWC, following which he received a letter stating that the meter was in good working condition. He was then put on warning for disconnection, which was carried out yesterday.
Efforts to contact the NWC’s head of communication, Charles Buchanan, proved futile.
Meanwhile, Myles said he wants the NWC to explain why his bill has jumped since the digital meter was installed.
“I need somebody to tell me what has happened as they can’t tell me that there is a leak,” he said. “It’s not like the bill moved from $9,000 to $12,000 or 13,000. “I’m not against paying the water bill but what is the correct bill?”
ADVERTISEMENT