WHAT A WICKED MAN 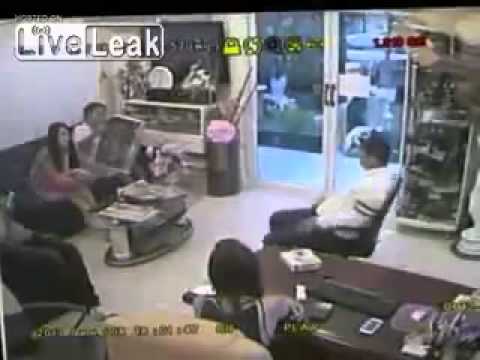 Mr. Yossaphon Hae-kla was sentenced by the Chonburi provincial court to execution after he shot and killed his girlfriend and her mother; both the murders and his dancing in glee after the offence were caught on CCTV camera.

In court room number 10 the case against the 35 year old man from Moo , Tambon Huay Kapi, Amphu Mueang, Chonburi province was read out. He used a 9mm gun to shoot his girlfriend Miss Kewalin Hongthong and her mother Mrs. Wimol Hongthongm killing both of them at the PS Modify Car Accessory shop located at Tambon Huay Kapi. The CCTV footage clearly showed the murder and the celebratory dance put on by the accused.

The prosecutor of Chonburi province together with Mr Narong Hongthong, the girlfriend’s father sued Mr. Yossaphon under case number 5801/56 for being in possession of a gun without permission, an offence that resulted in a sentence of six months in jail being handed down. He was then charged with the murder of the two women. Mr. Yossaphon accepted hesitantly that he committed the double murder as the court evidence left no doubt. The judge concluded that the man’s dancing, caught on tape after the offence, ridiculed the law and demonstrated his utter lack of respect for the law. For that the court sentenced him to death as well as ordering him to pay 1.200,000 baht to the plaintiff and 1.410,000 to the children of Mrs. Wimol.

Mr. Yossaphon looked distressed as he left the courtroom, friends and family of the victims said they were satisfied with the court’s decision.

6 thoughts on “WHAT A WICKED MAN”